This is a LEGO Review of the 76128 Molten Man Battle – Spider-Man: Far From Home

“Hey! Holy cow! You will not believe what’s been going on. Do you remember when we were in space? And I got all dusty? And I must’ve passed out because I woke up and you were gone. But Doctor Strange was there right. And he said ‘It’s been five years. Come on, they need us.’ And he started doing the yellow sparkly thing that he does. Anyway…”

Not really sure which MCU timeline this comes from (likely after the events of Endgame) but this set comes with a hot fiery mech of Molten Man like the one in the Spider-Man Far From Home trailer but the design is definitely one of a kind. It is a very large fiery beast in the trailer that tower over the buildings. I can’t say that it looks ugly but it is very nicely presented this way. 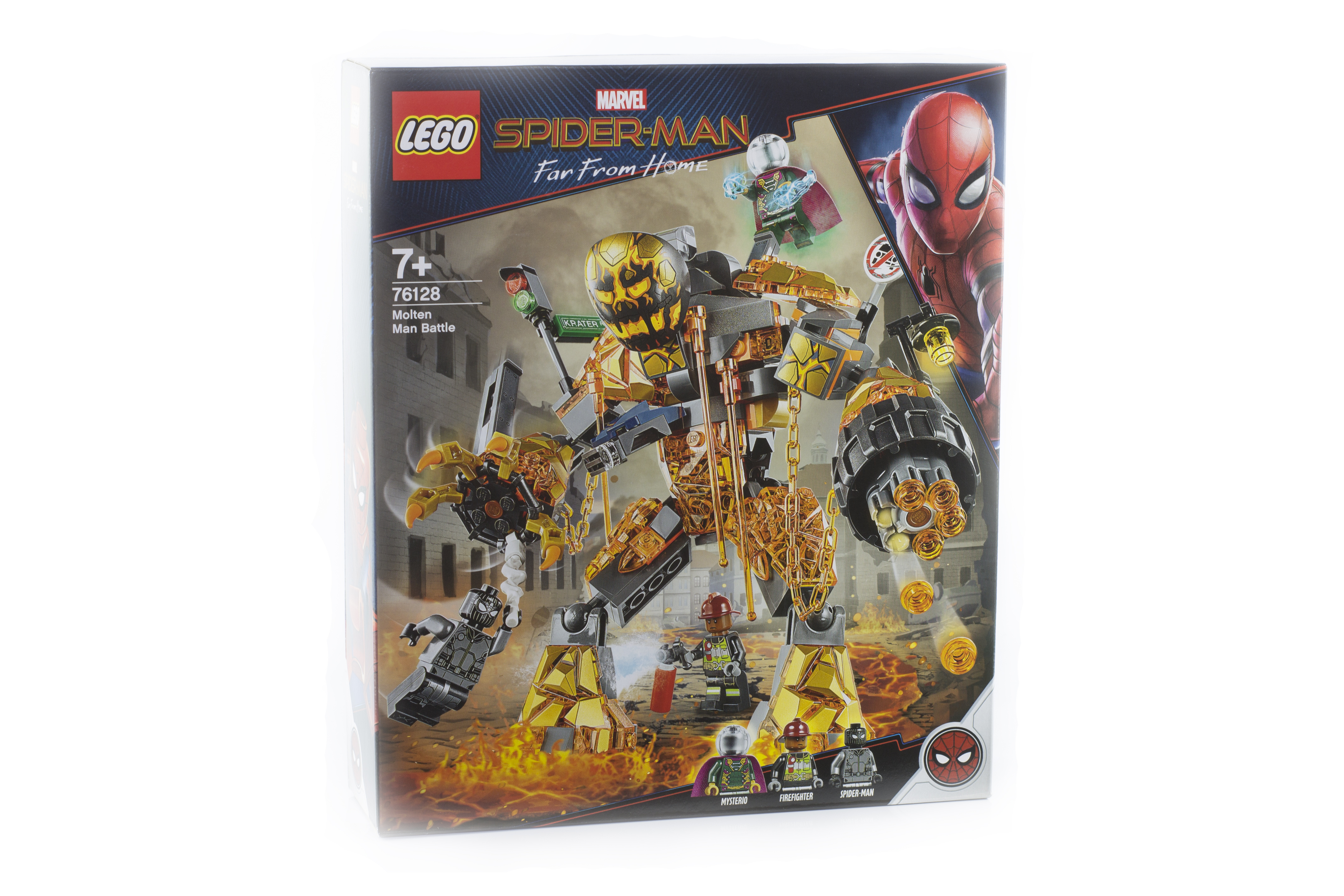 The box art has a warm tone that will burn your eyes if you stare a little bit longer. Lol. Here you can see spiderman is in his black suit but isn’t that black is the colour that absorbs heat? Maybe after fighting this Molten man he will go find Hydro man. Haha. 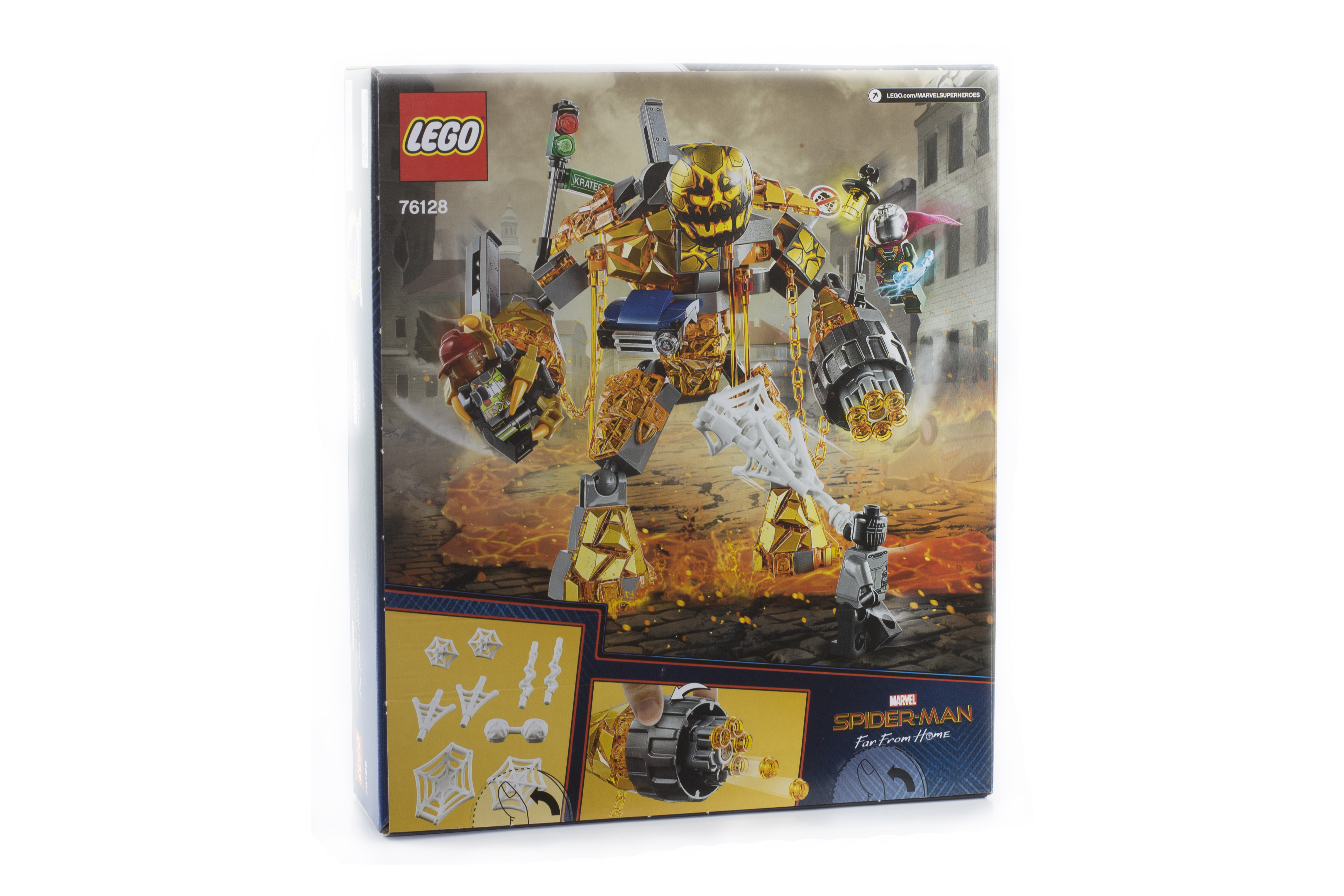 There aren’t any play features here as you can play the mech as a figure with a six-stud shooter on it’s left arm. However this set is well equipped with whole lot of new spiderman’s web parts. 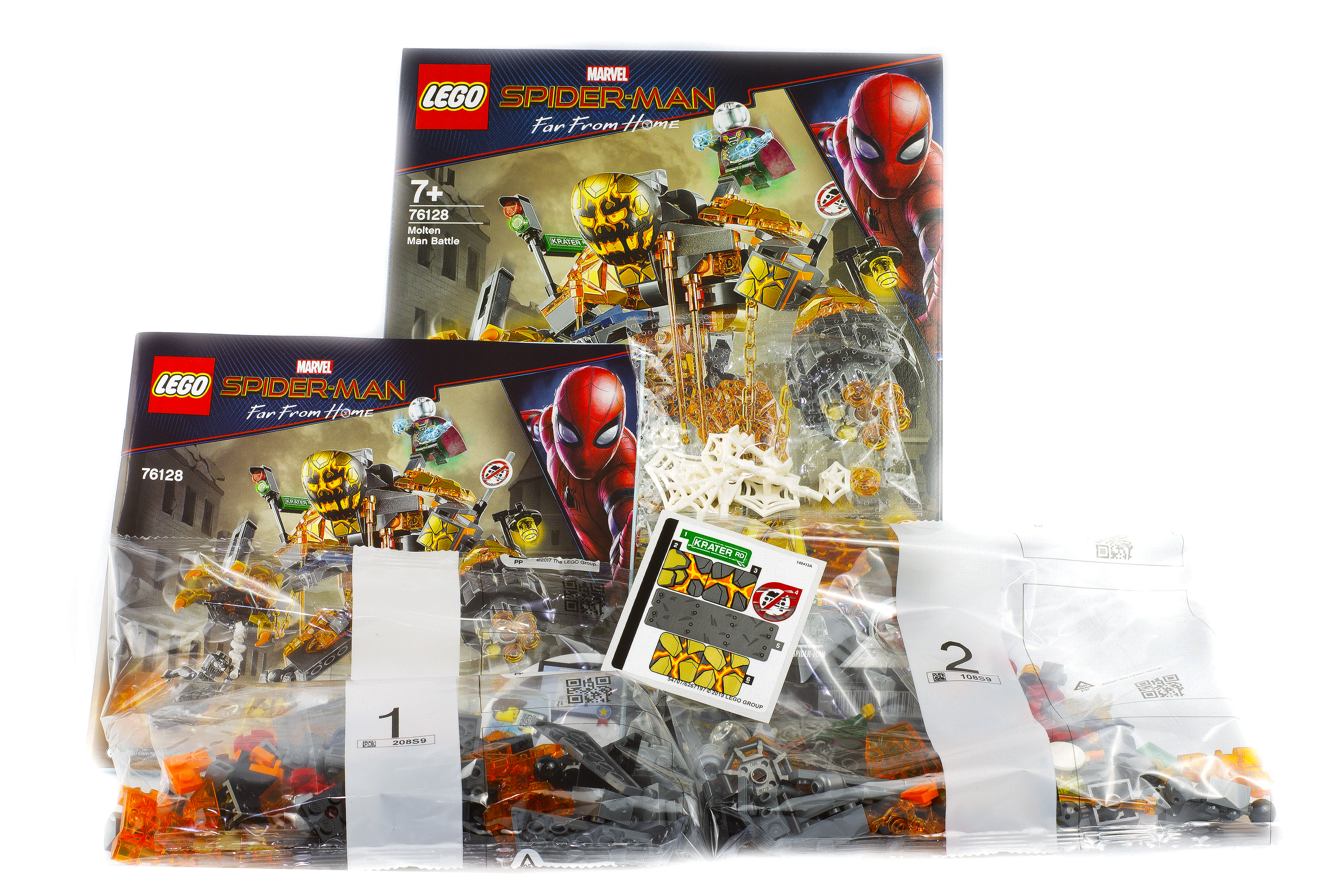 These are the contents in the box which consists of one instruction booklet, one sticker sheet and two numbered bags. 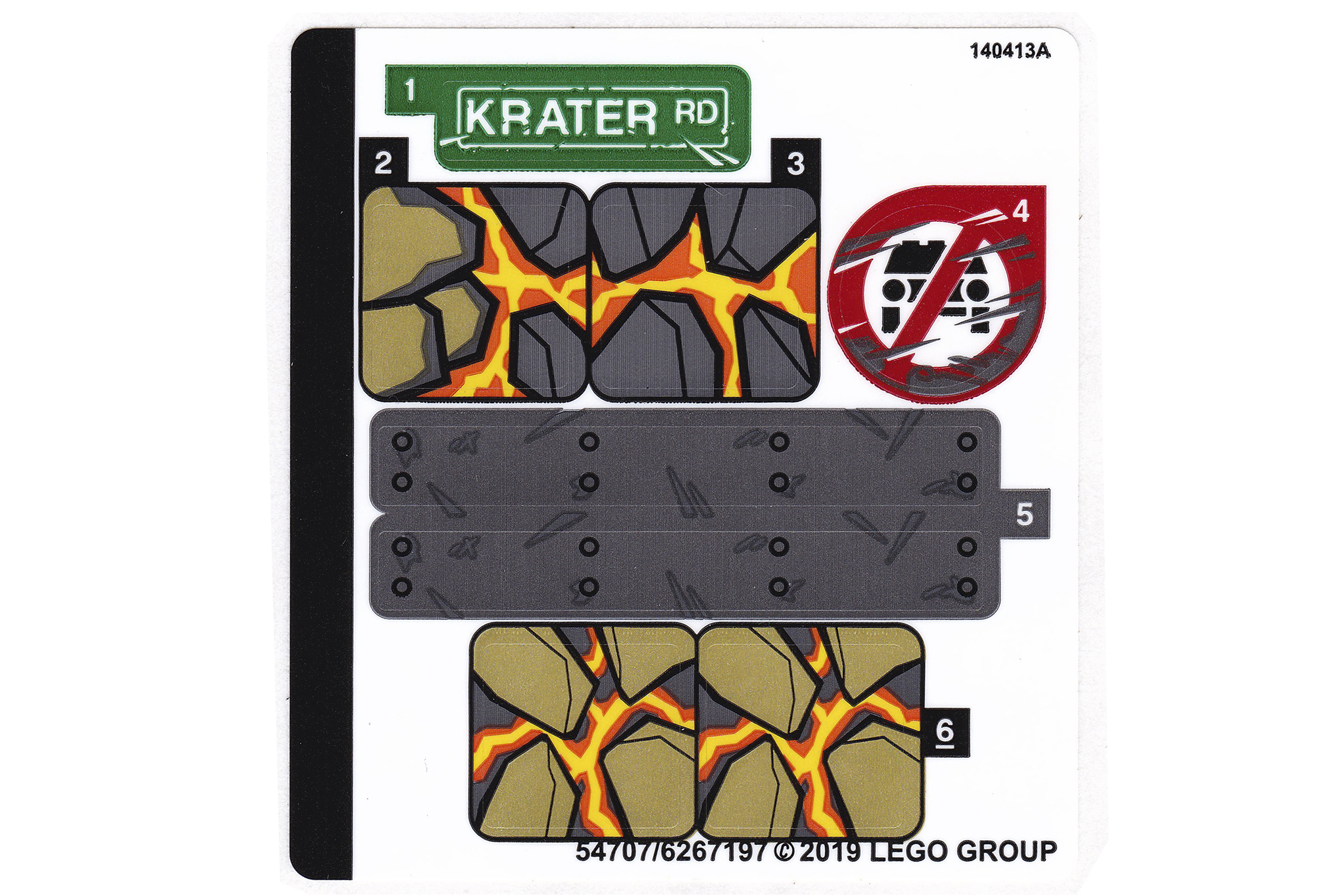 The stickers here in this set adds fiery details to the mech and a road sign with the word KRATER RD. 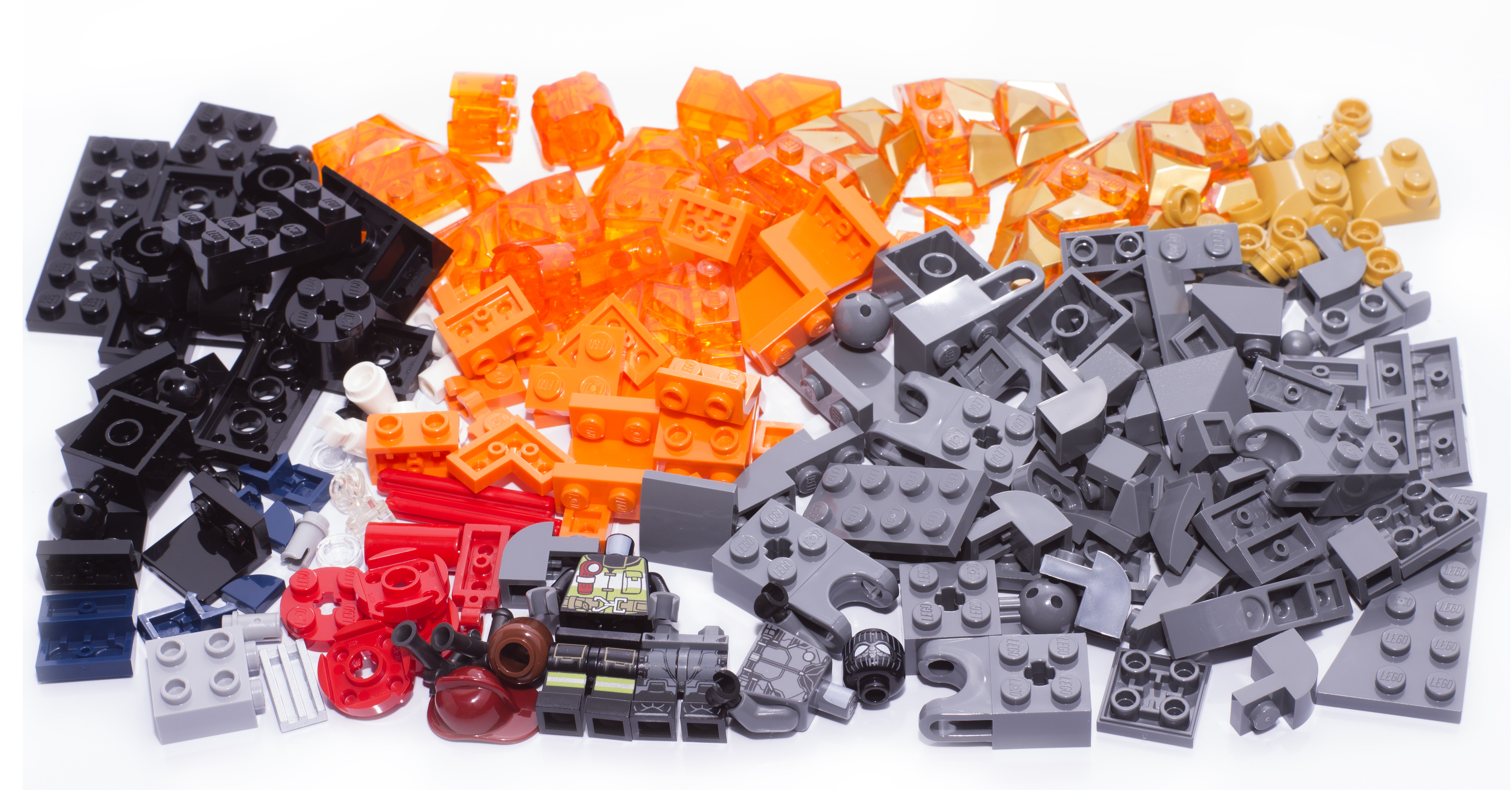 Bag one gives us two minifigures and the build of Molten man’s torso and legs. The trans orange parts are so eye pleasing. 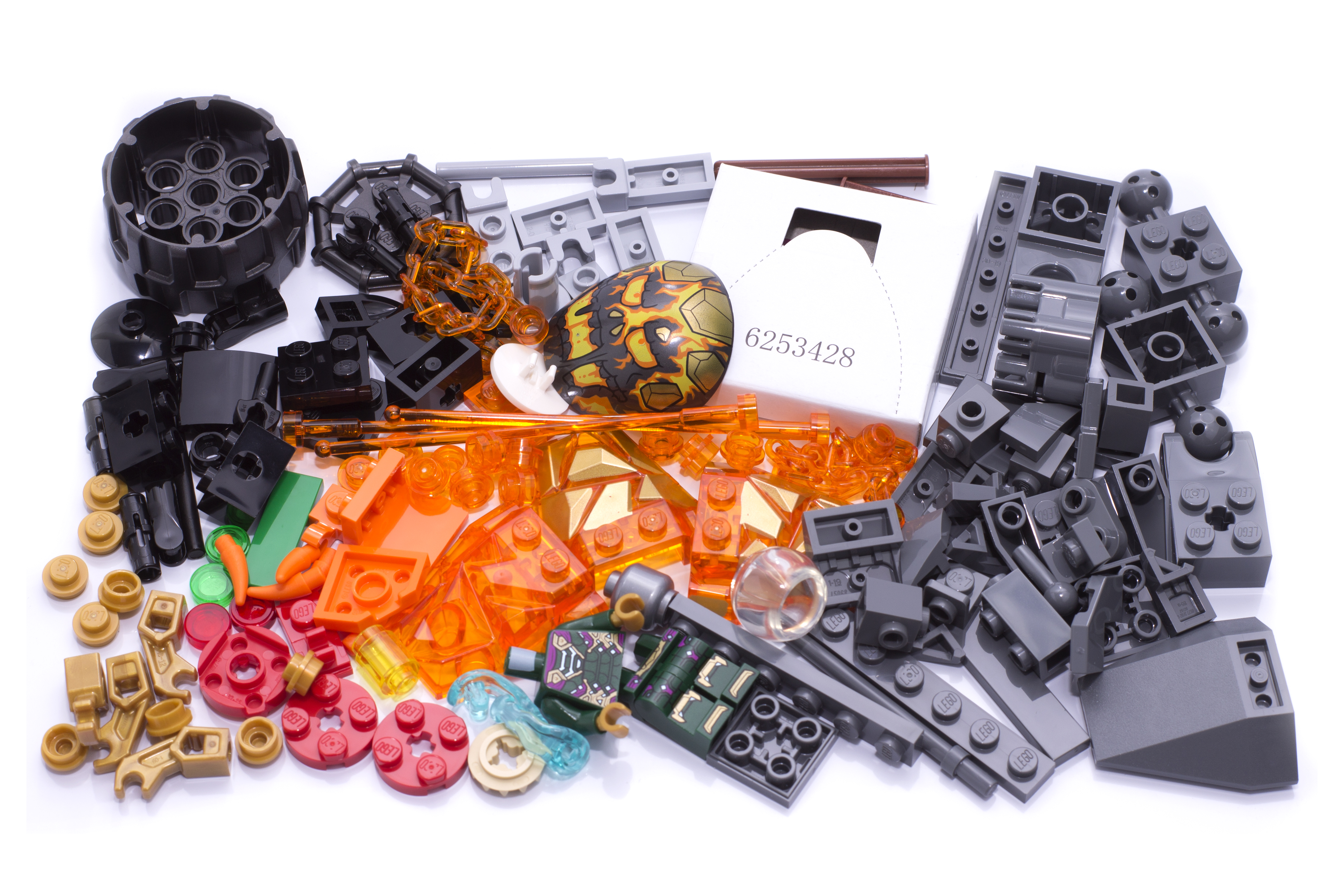 Bag two completes the build and Mysterio is here with his cape packed in that white box. 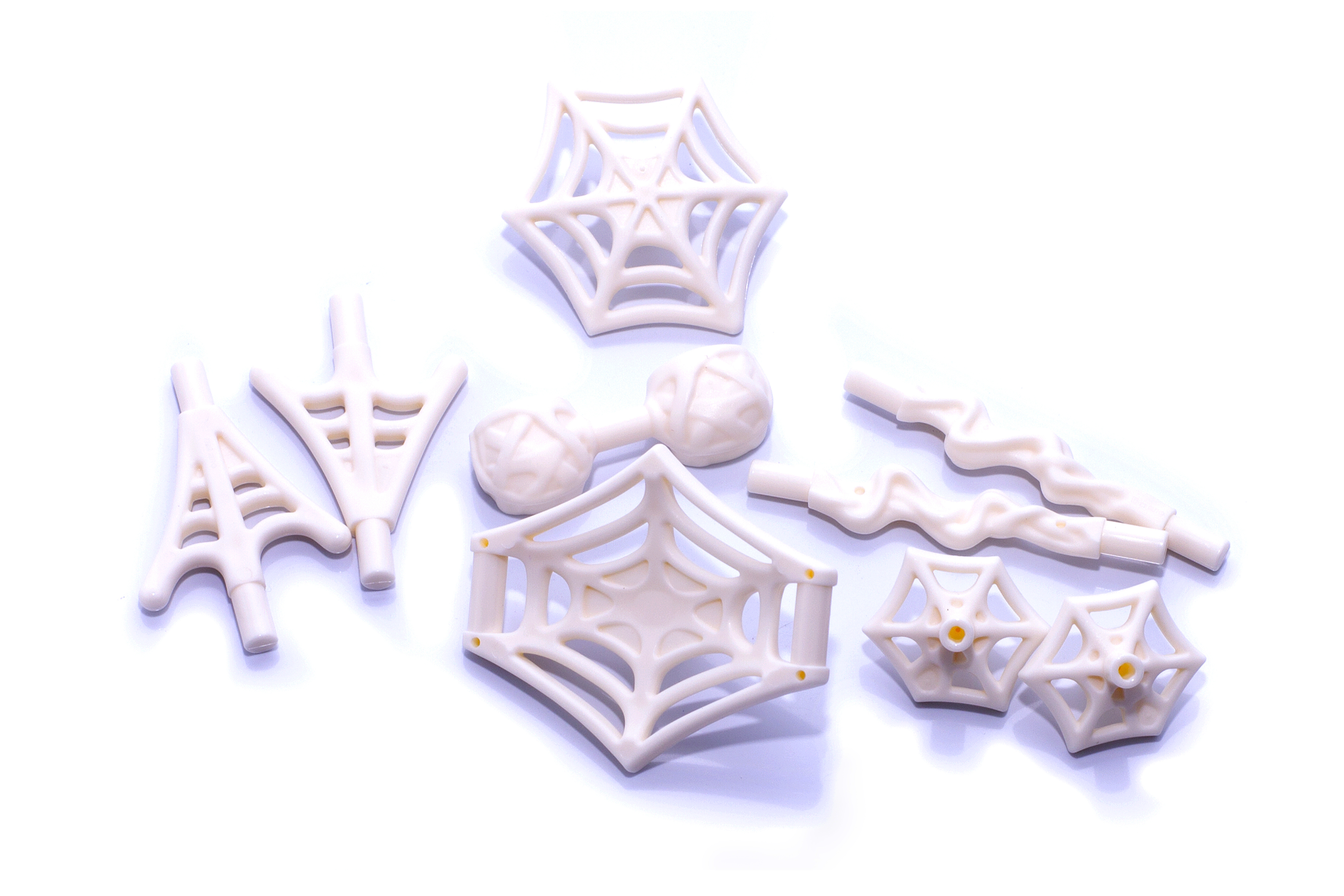 This is categorised as a Multipack in bricklink with the name of White Minifigure, Weapon Pack Spider-Man Web Effects, 9 in Bag (Multipack). Code name 36083. They are very nice new web parts for Spider-man in 2019.

These are a few interesting parts in this set. Towball and Trans orange chain are not new while the rest are new parts in 2019. I love the printed face of Molten Man and the Gold facet trans orange wedge. The printed gold are nice but some with pitted marks as in the picture. Do let us know if your parts are like that too. 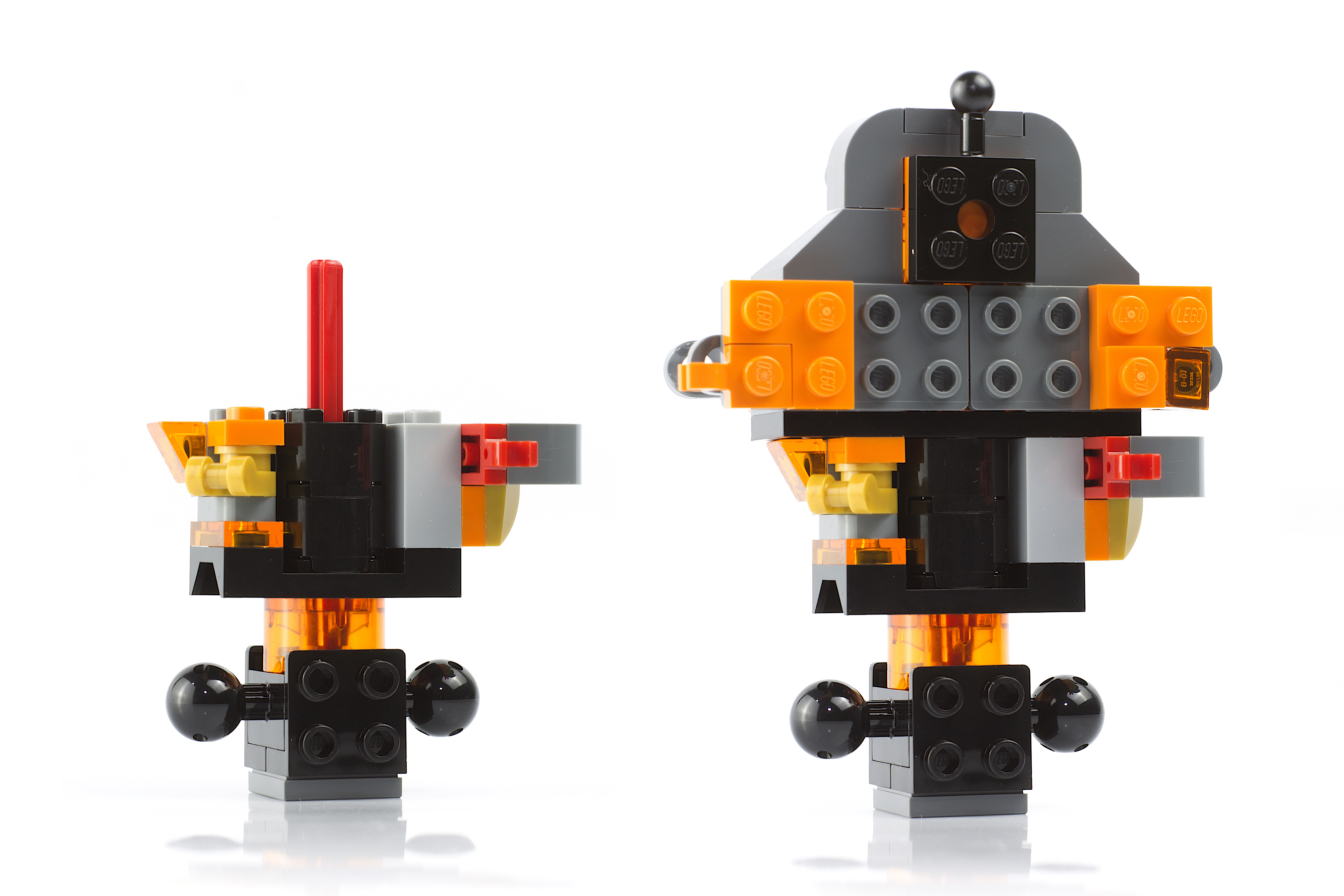 This is the early torso build. It looks like a kitchen furnace to me. Lol. 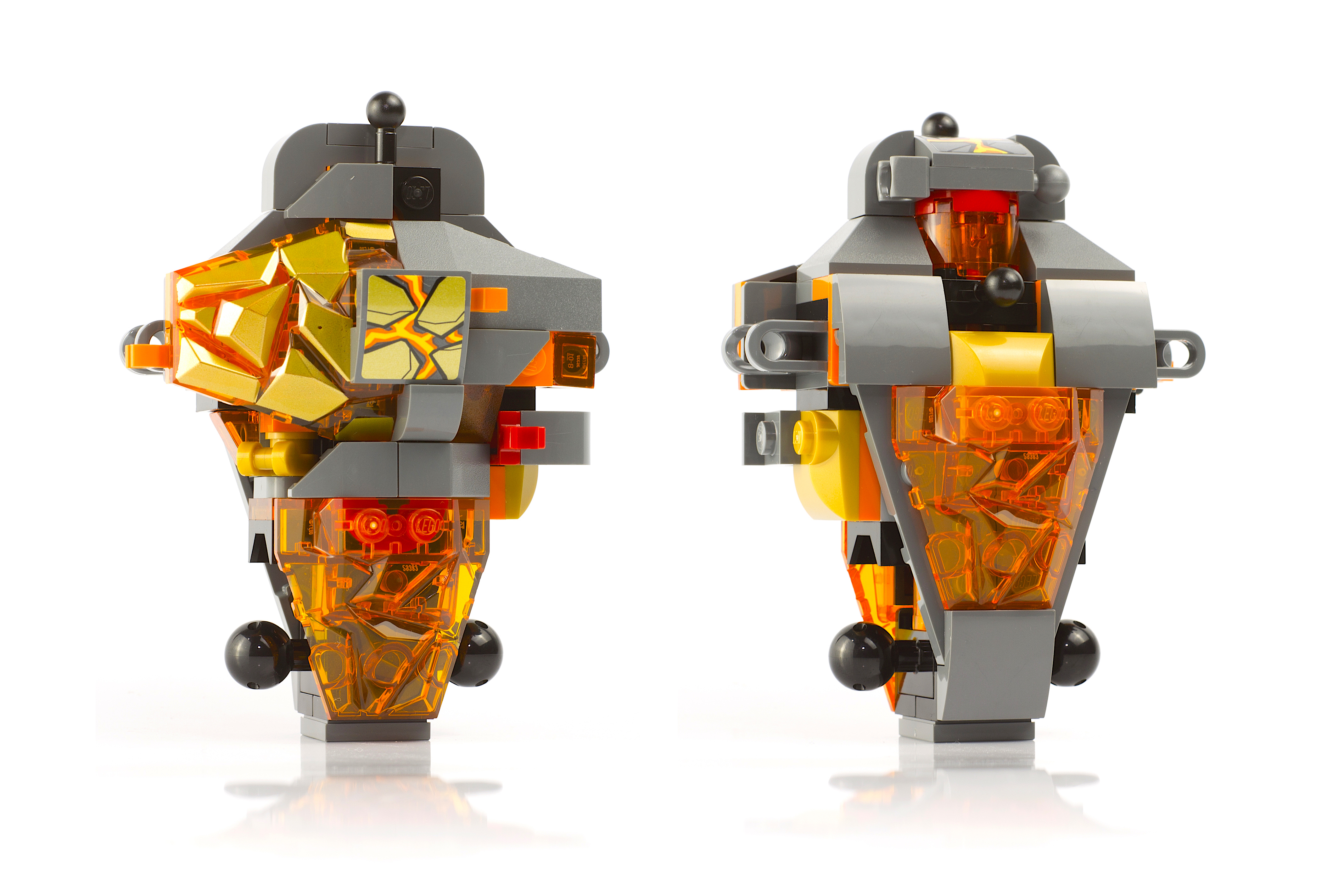 Then add some of the polygon top wedge on it. The stickers did have some addition of the fiery detail of the Molten Man. 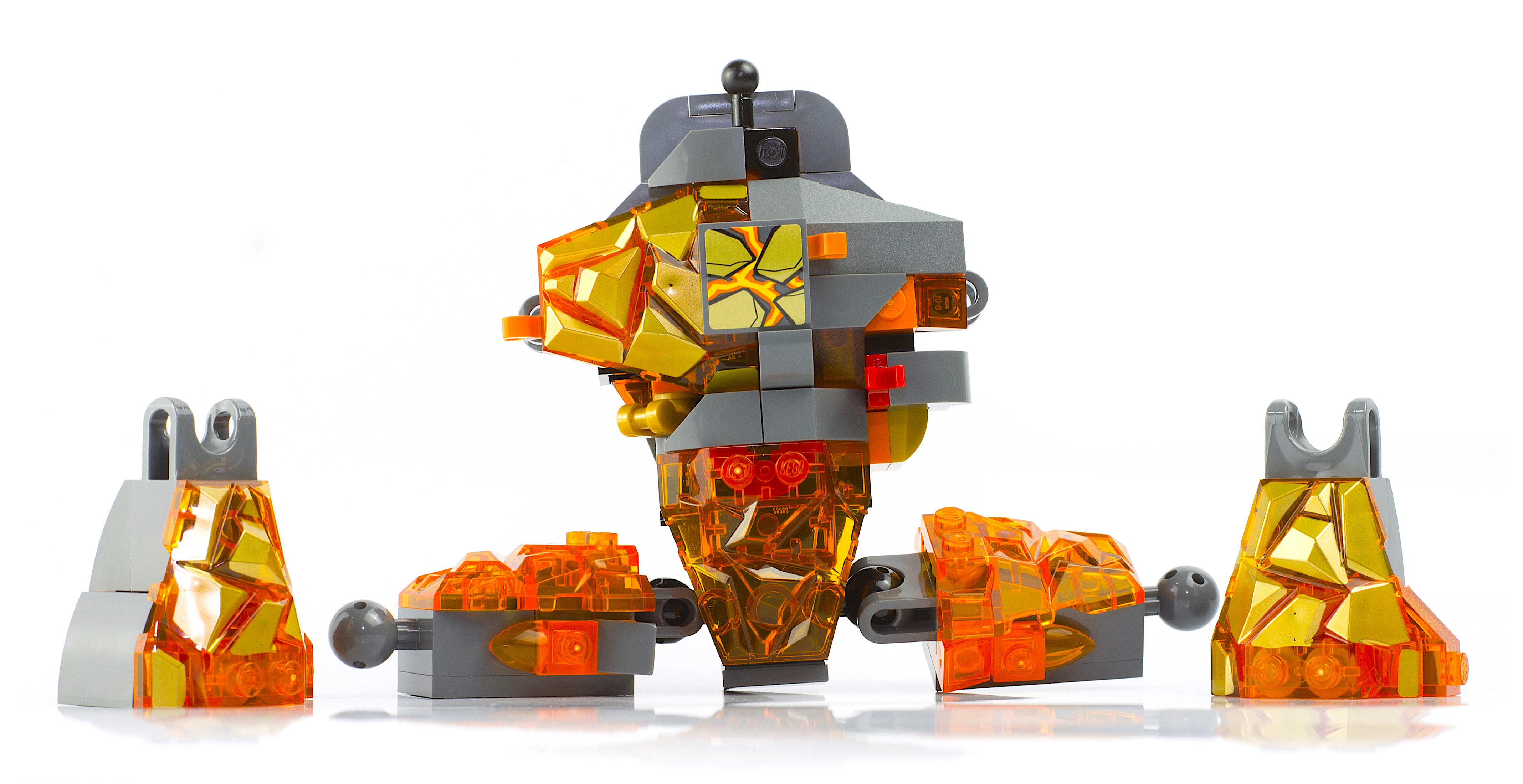 Then the legs. They are also finished with the polygon wedges which I like the texture and the transparency of the parts here. Gold facets are superb too. 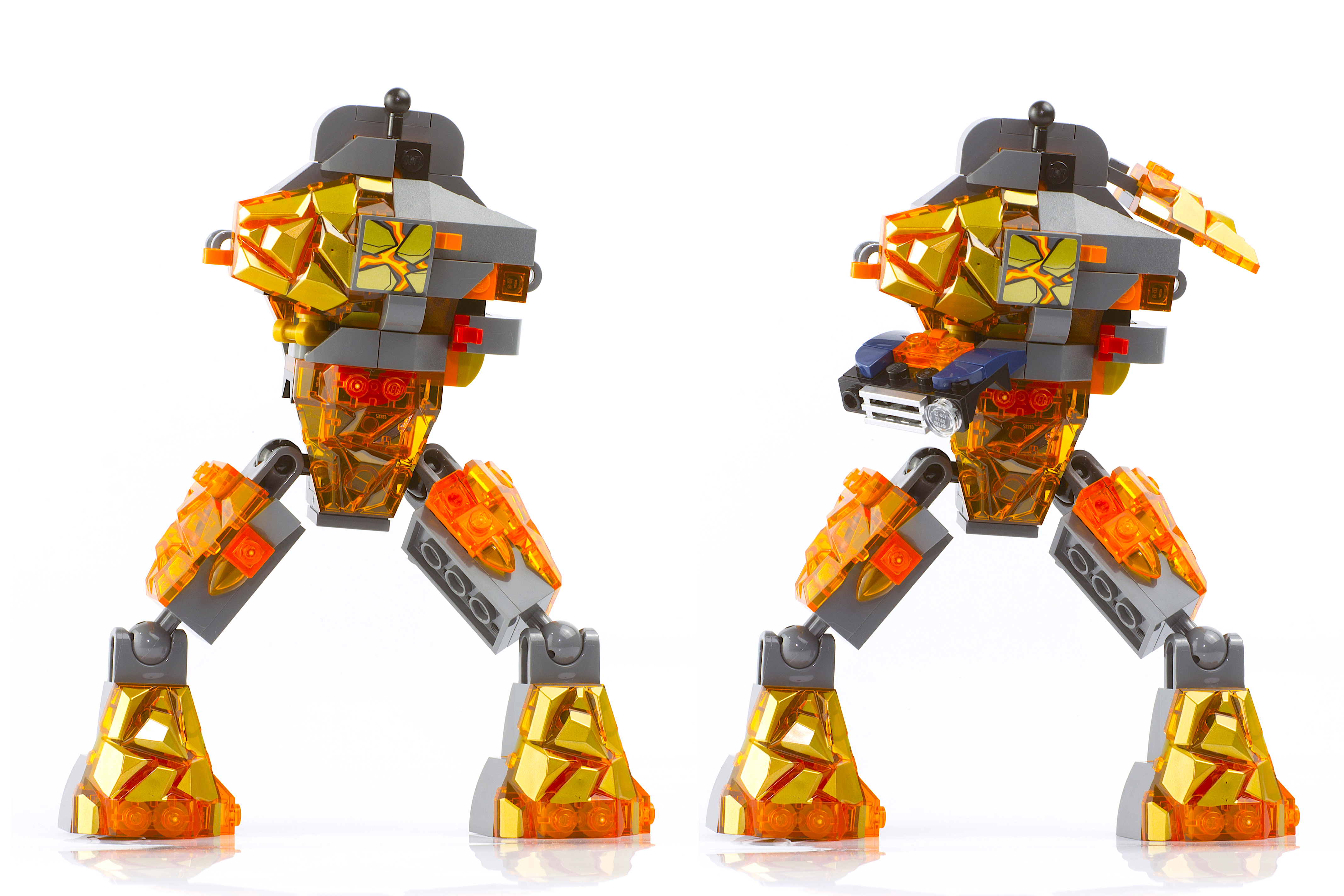 After assembling the legs, we started to add a melted car near the right side of the chest and a left shoulder pad. This melted car which is fused to the body due to the extreme heat was clipped to the body here and the idea is brilliant! It really looks like a car is stuck there while we only need to build the front half of it. 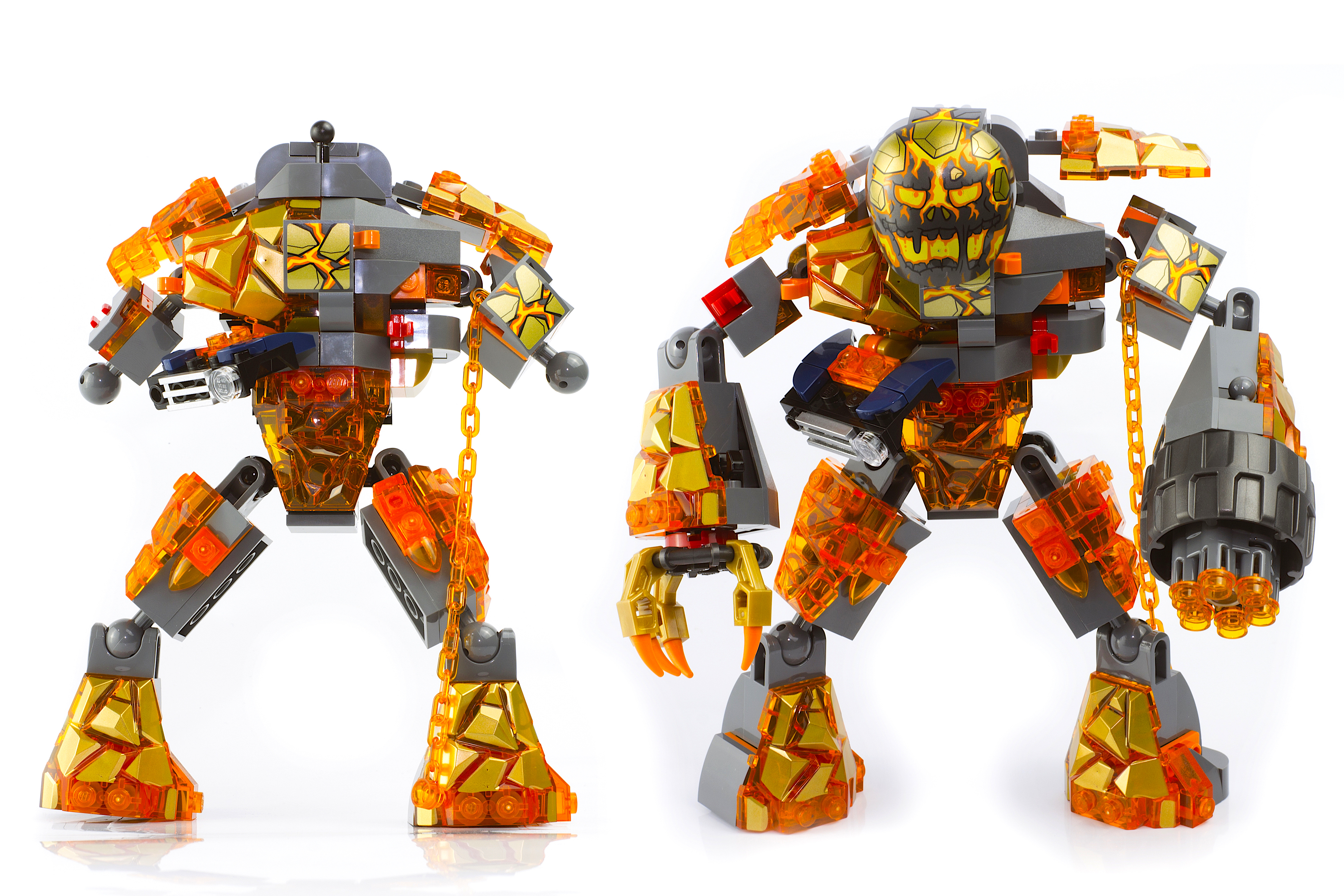 Then we build the arm, and then the hands. This build reminds me of the Clayface in The LEGO Batman Movie.

This GIF shows the assembling steps of the Molten Man complete with the road signs and traffic lights. I really love the idea of the bits of the road sticking in the torso of the figure. 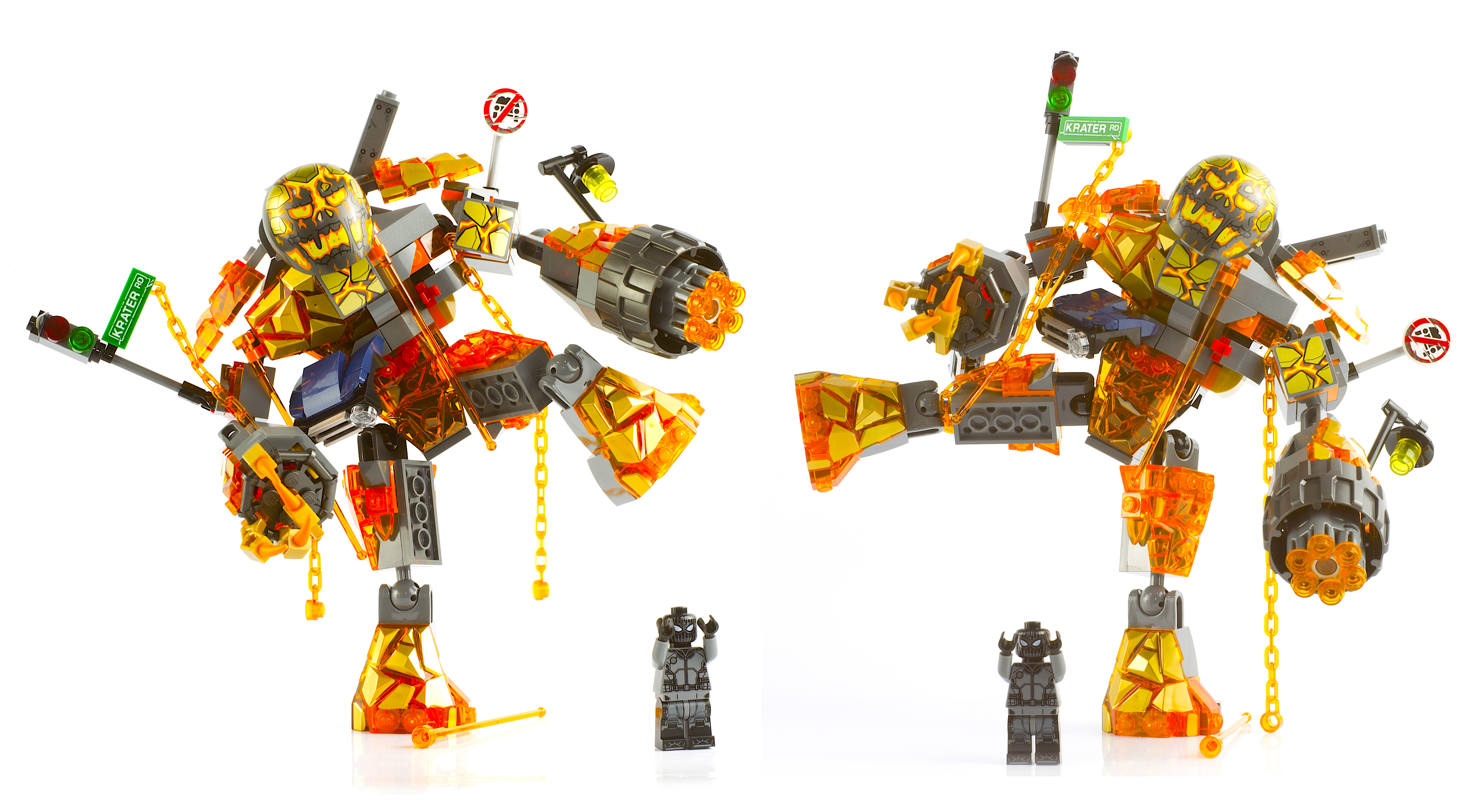 About the pose-ability, he can stand on one leg but you will need to slowly counterbalance him with the weight of the body as the ball joint is quite slippery at the ankle. 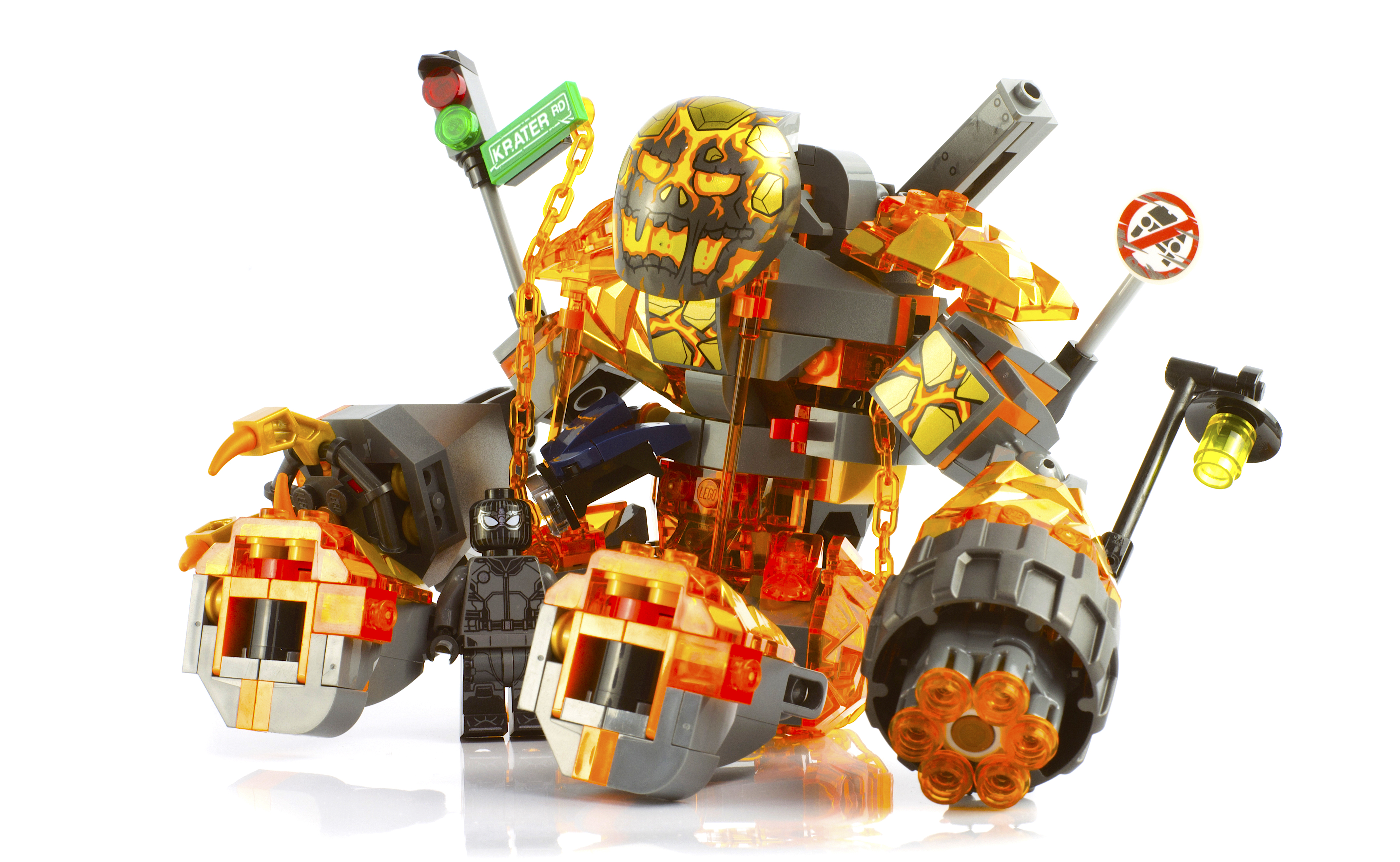 Unlike the Hulkbusters, this build can be sat down but the look of him sitting down seems tiring. Maybe is the facial expression. Haha

Digressing a bit, this figure could be modded to be Balrog from the Lord of the Rings franchise. It’s actually time for some great MOC of this ancient fiery beast that ‘bleached’ Gandalf to surface! With these trans orange part, I think have somebody coming out with something pretty soon. 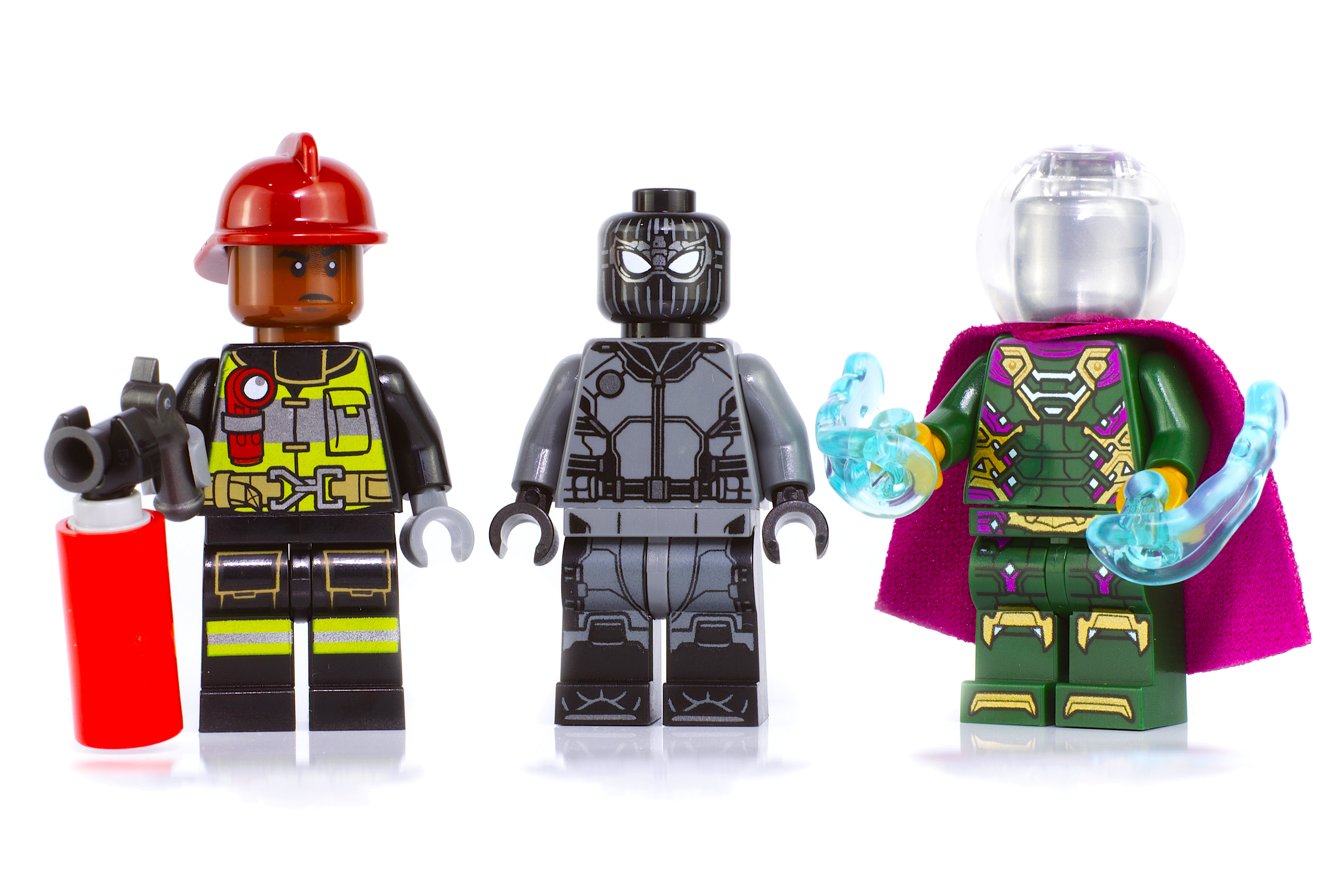 The three minifigures included are very nice but who is this firefighter? Maybe he plays a significant role in the movie, so we have to wait for end of this month to find out. We have a black stealth Spider-man! The prints are awesome and I like the black and grey color scheme. Mysterio is very nicely printed on dark green torso and legs and the fishbowl helmet is conveniently placed on his all grey headpiece. 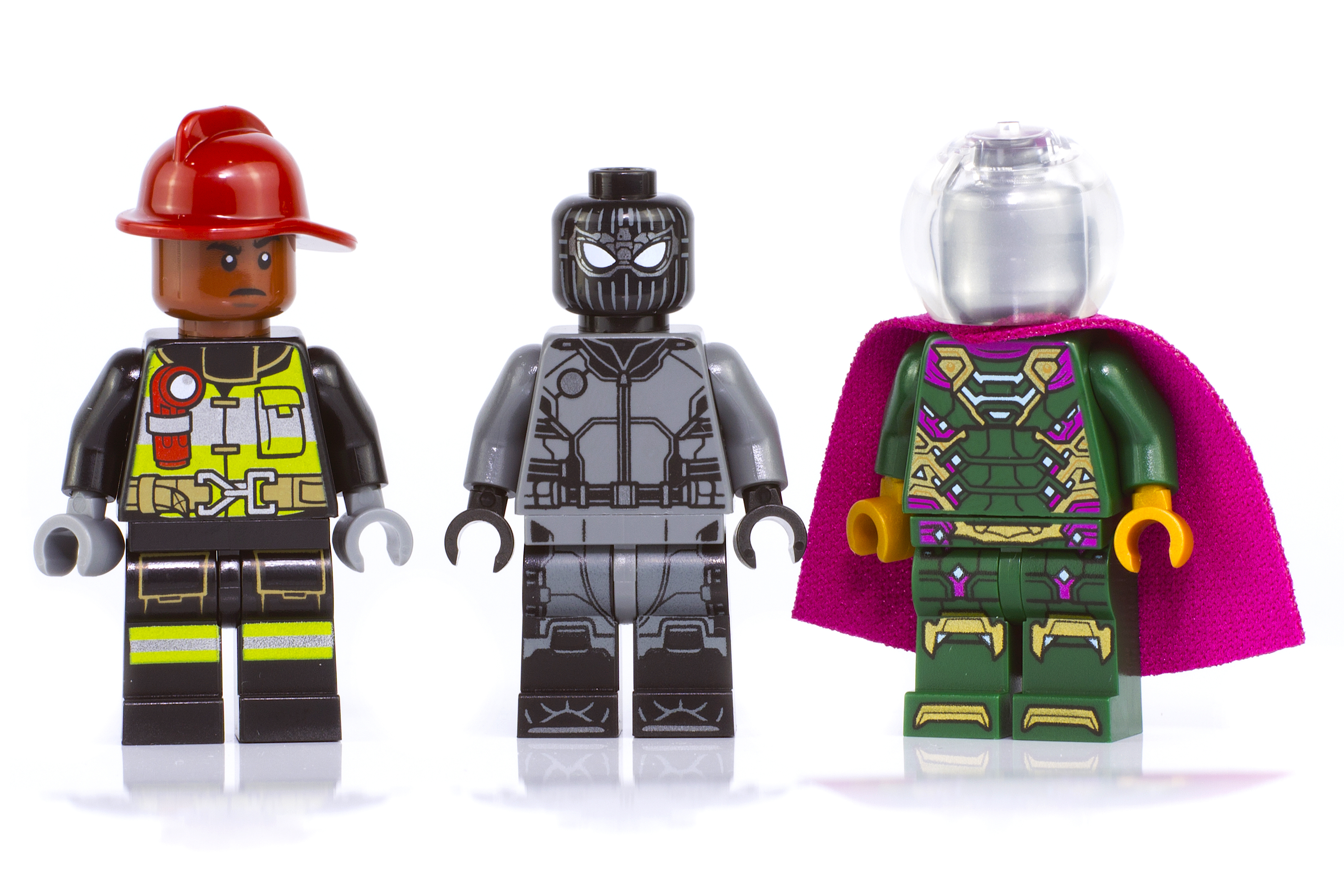 The minifigures without the accessories. The firefighter looks like a common city minifigure but the print on the torso is great. Mysterio has a pair of pearl gold hands that is quite special. 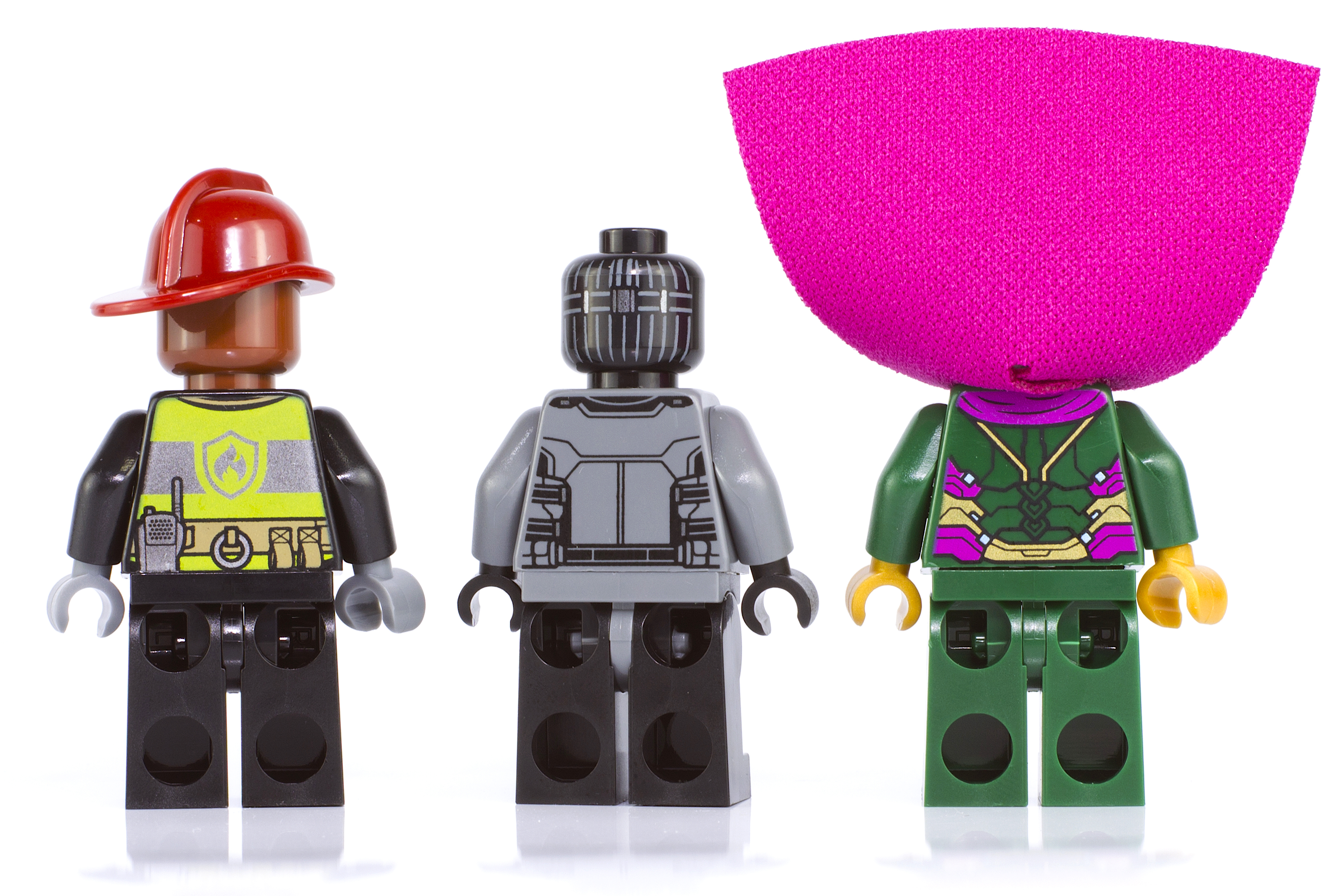 Back of the minifigures are quite heavily printed too. You can see a walkie talkie on the firefighter’s belt and what I really love here is the continuity of the cape printed on the back of Mysterio’s torso which shows a great design effort at melding the cloth cape and the plastic minifigure into one complete minifigure.

The fire extinguisher build is very convenient to be held by a minifigure and the use of the gun as the nozzle is brilliant!

Comparison with previous versions of Spider-man. As you can see, the black Spider-man lacks the spider logo on the chest but the printing on the toes really added some points to this supposedly stealthy but dark looking minifigure.

The back of the head is also well printed with the stripes extended from the front.

So they say, Mysterio’s suit is the mix of these four characters, what do you think?

This is a very nice build of an ugly figure I would say. For a mech, it is quite sturdy but can’t really hold still when you try to clip the debris on its body so you need to do some counter balancing when posing the figure. Ball joints are quite slippery but it can still stand well if the weight is distributed evenly. Minifigures wise, they are very nice and we will probably need to wait for the movie to see why this generic firefighter is included in this set instead of Ned.

I hope you like my review of this set and stay tuned for the review 76129, Hydro-Man Attack

This has been a full and complete set review by Mr. Beast on all of the builds in the LEGO Avengers Infinity War sets line-up.

The set used for this review were sent to us by The LEGO Group for the purpose of a review. Provision of sets do not in any way influence or guarantee a positive review from us.