LEGO has updated their image servers with images of the latest Brickheadz to join the party with the reveal of 40367 Lady Liberty which carries a serialized Brickheadz numbering of 93.
The back of the box showcases some of the locations of the Statue of Liberty and its replicas around the world.

Based solely on some internet trawling(Thank you GOOGLE!), these seem to be the three versions portrayed on the box.

>>The original one was gifted from France to New York in 1886 and placed on Liberty Island, New York, USA
>>A 1/4 scale replica was made in 1889 and placed on Île aux Cygnes, Paris, France
>>A replica of that French replica was made in 2000 and placed permanently in Odaiba, Tokyo, Japan overlooking Rainbow Bridge after that 1/4 scale replica from Île aux Cygnes, Paris, France was displayed for about a year in Odaiba, Tokyo, Japan from 1998-1999 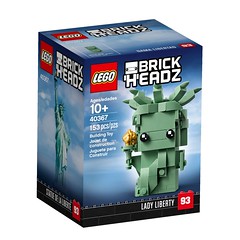 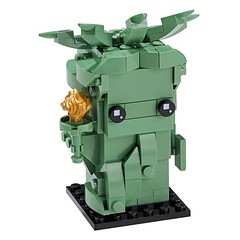 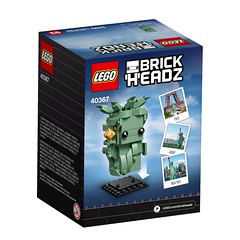