We are going a bit unorthodox today by reviewing a Lego Stationery set, particularly the buildable ruler released in 2016. 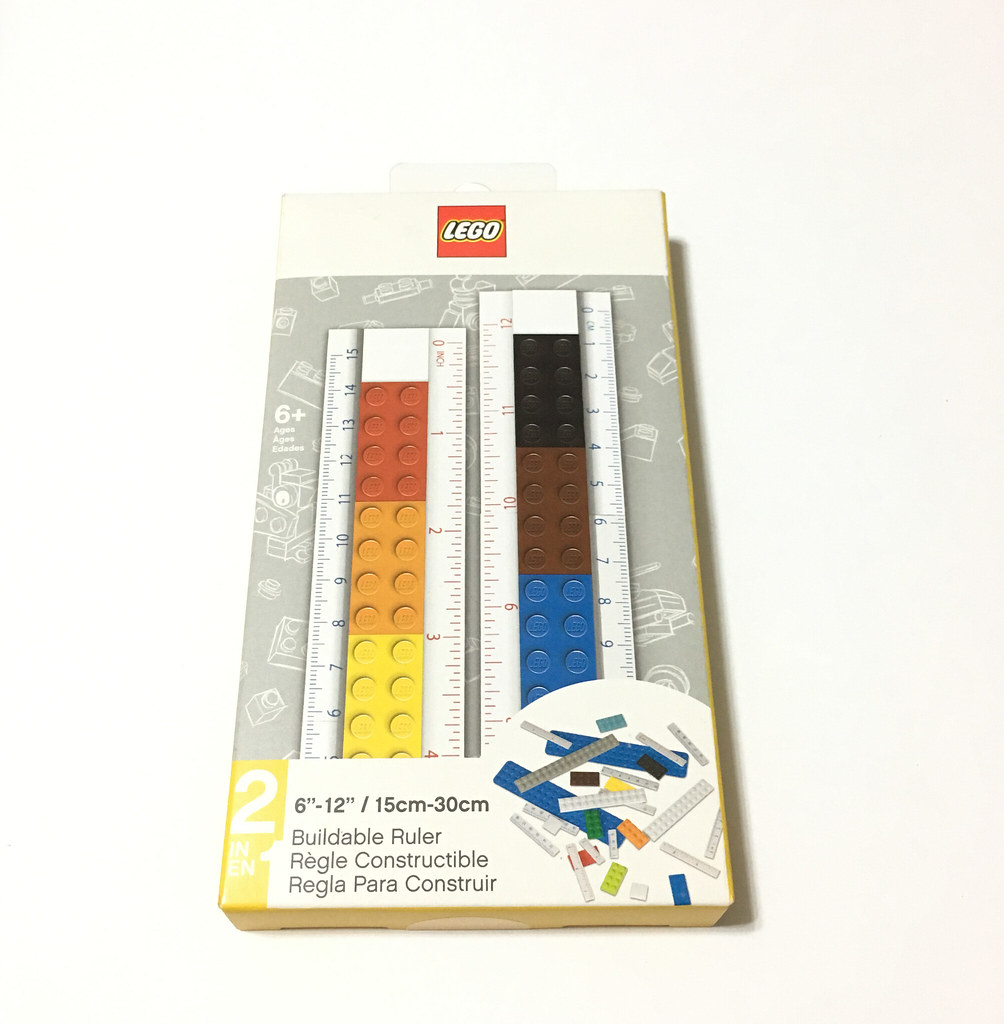 The back of the box sorts of sets it straight by showing that you need to dismantle the 30cm ruler in order to make the 15cm ruler.

Other interesting nuggets of information : Bricks imported from Denmark, Printed and packed in Shenzhen China, presumably under the IQ Hong Kong Limited company. 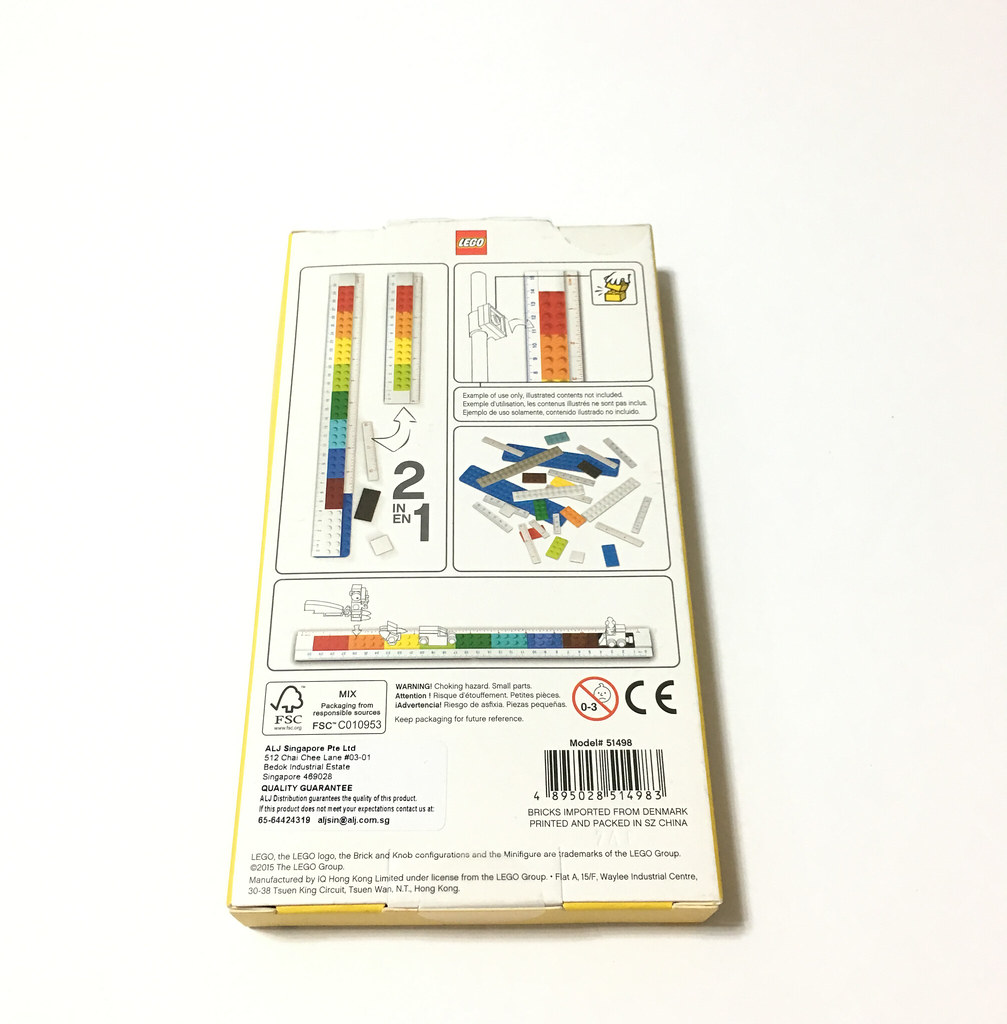 Contents of the box are quite normal including an instruction sheet, a heat sealed (packed manually) pack of bricks and a choking hazard warning. Opening the sealed pack,  I found that I had a missing piece which never happened in all my AFOL life. Only one 2×2 white tile was given instead of two. Luckily it was a a non critical piece and was easily replaceable but this could really have been prevented and I think it would cause some heartache for some buyers. 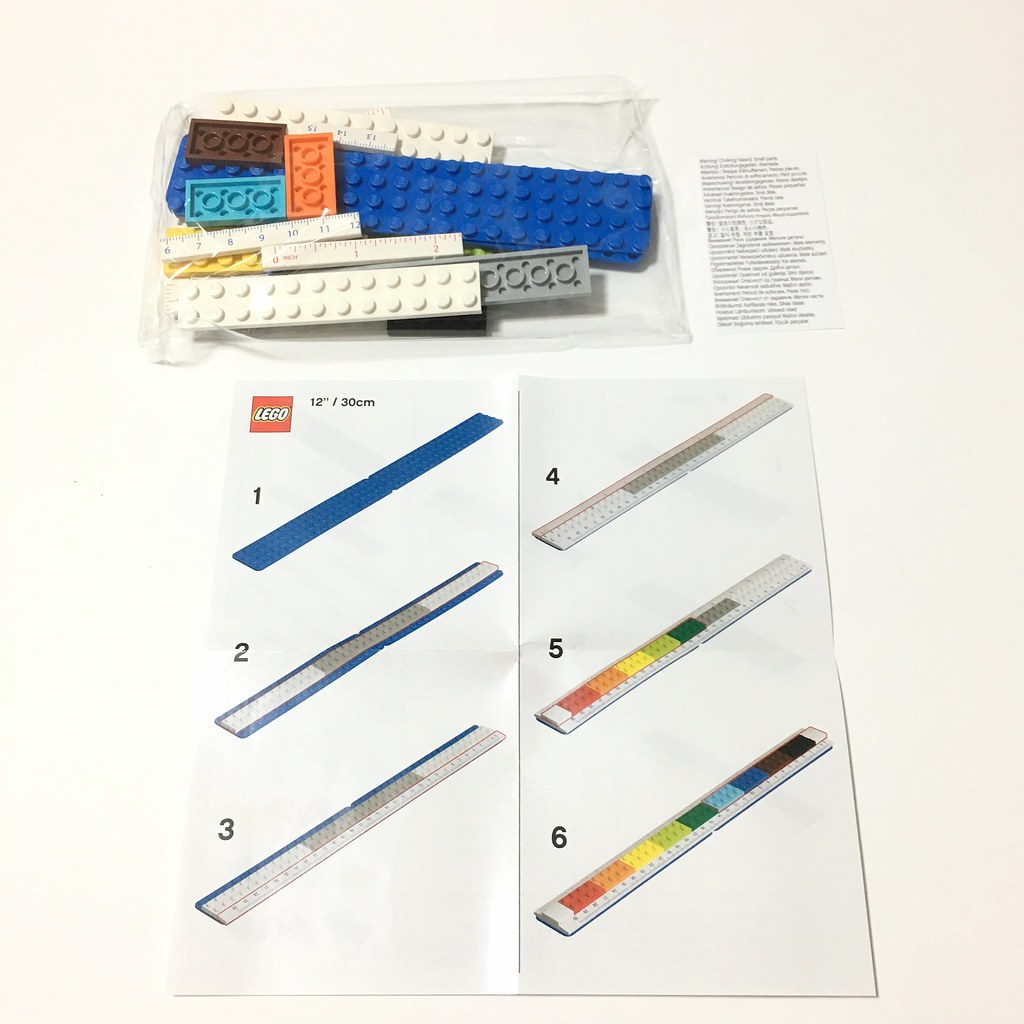 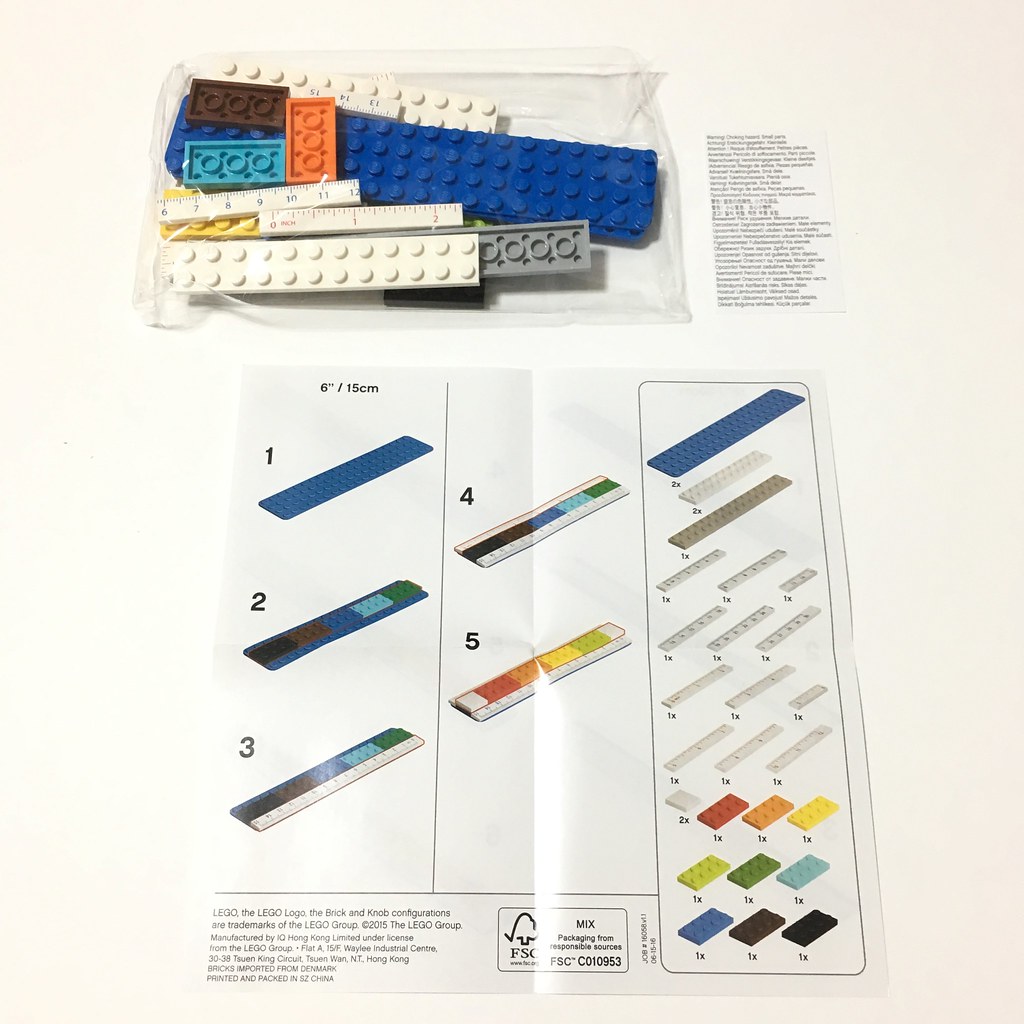 The first build I decided to tackle was the 30cm long ruler. This is done on two blue 4×20 baseplates joined at the shorter end stacking one 2×16 plate on top and finishing it off with two 2×12 plates at both ends. 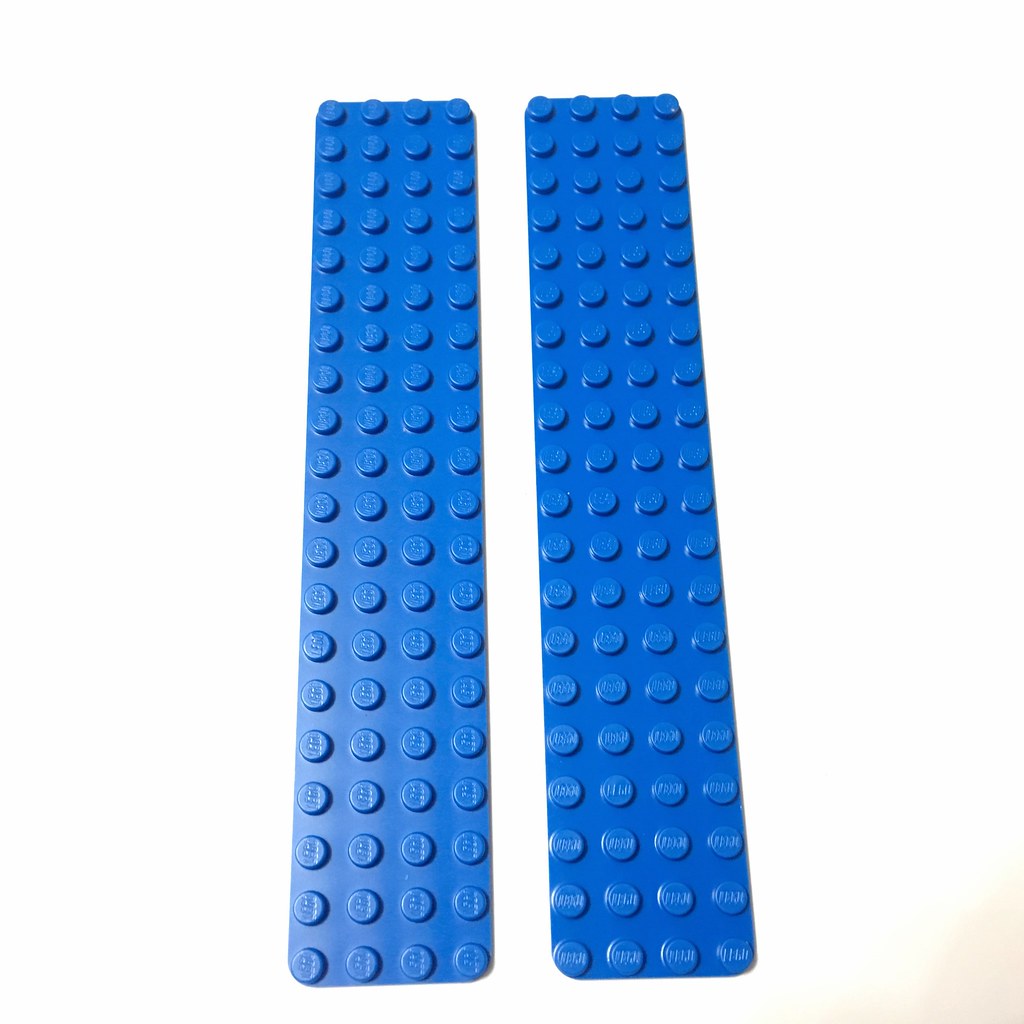 Lengthwise, on one side were the metric length gradiations(cm) printed in blue and on the other were imperial lenth gradiations(inches) printed in red. These gradiations were each printed on a 1×8 tiles. Stacked on top of the 2×16 and 2×12’s were another layer of 2×4 plates of various colours and ended with two 2×2 white tiles.

A side view shows the common small gap seen when combining two baseplates. This has no impact up top as it’s covered up by the normal plates and tiles.

The gap also does not impact any functionality if you need to draw lines with the ruler as the the guide is on the tile and not the baseplate as can be seen from the bottom. 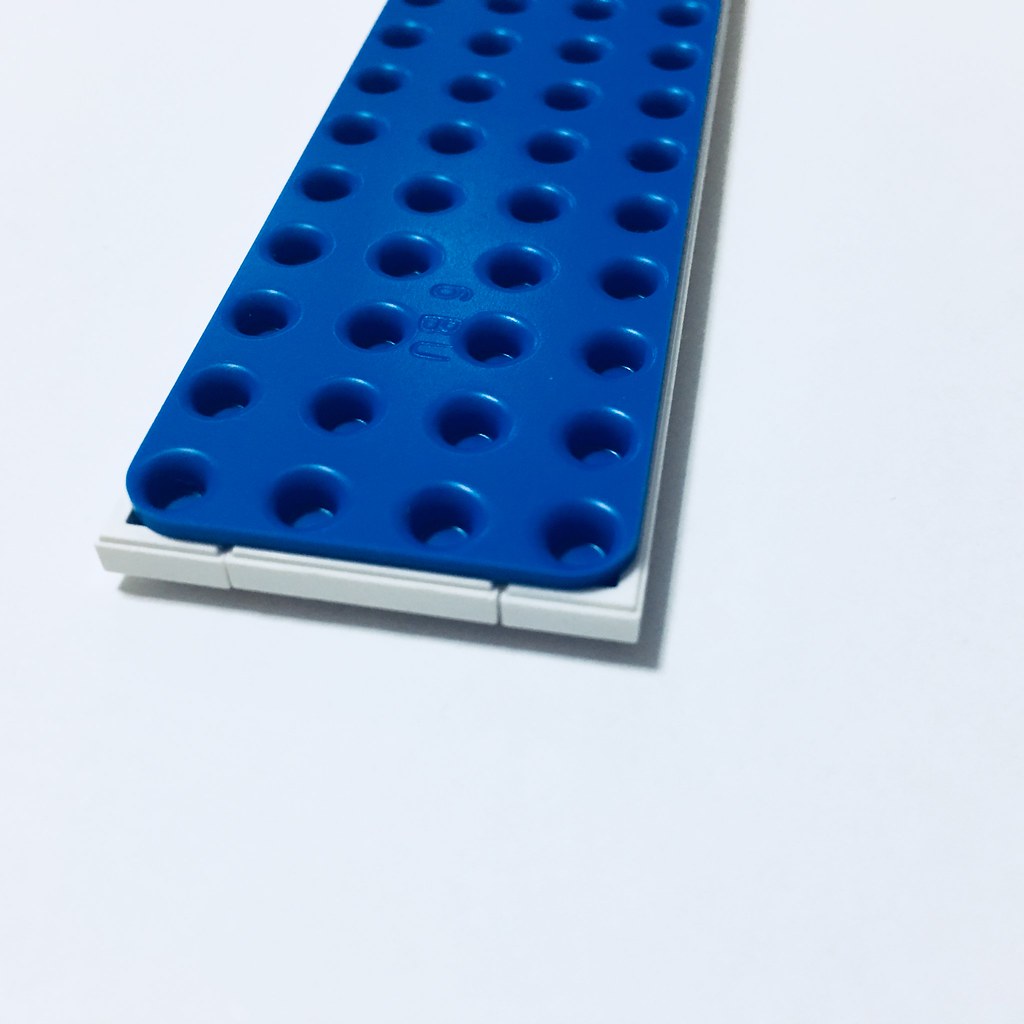 Switching it to the 15cm version requires quite a lot of disassembly and it’s a pity they did not include the brick separator here. Again, it’s not an issue for me but would be an issue for those that do not have it. Five 2×4 plates, six 1×8 gradiation tiles and the 2×16 and 2×12’s were taken out and replaced with two 1×4 gradiation tiles. What’s left is pictured below next to the 15cm ruler. I guss you could cobble out another 15cm ruler if you really needed it . Maybe I’ll update this post with it the next time round. (Post updated with another functional “10cm” ruler made from the leftovers of the official 15cm ruler) 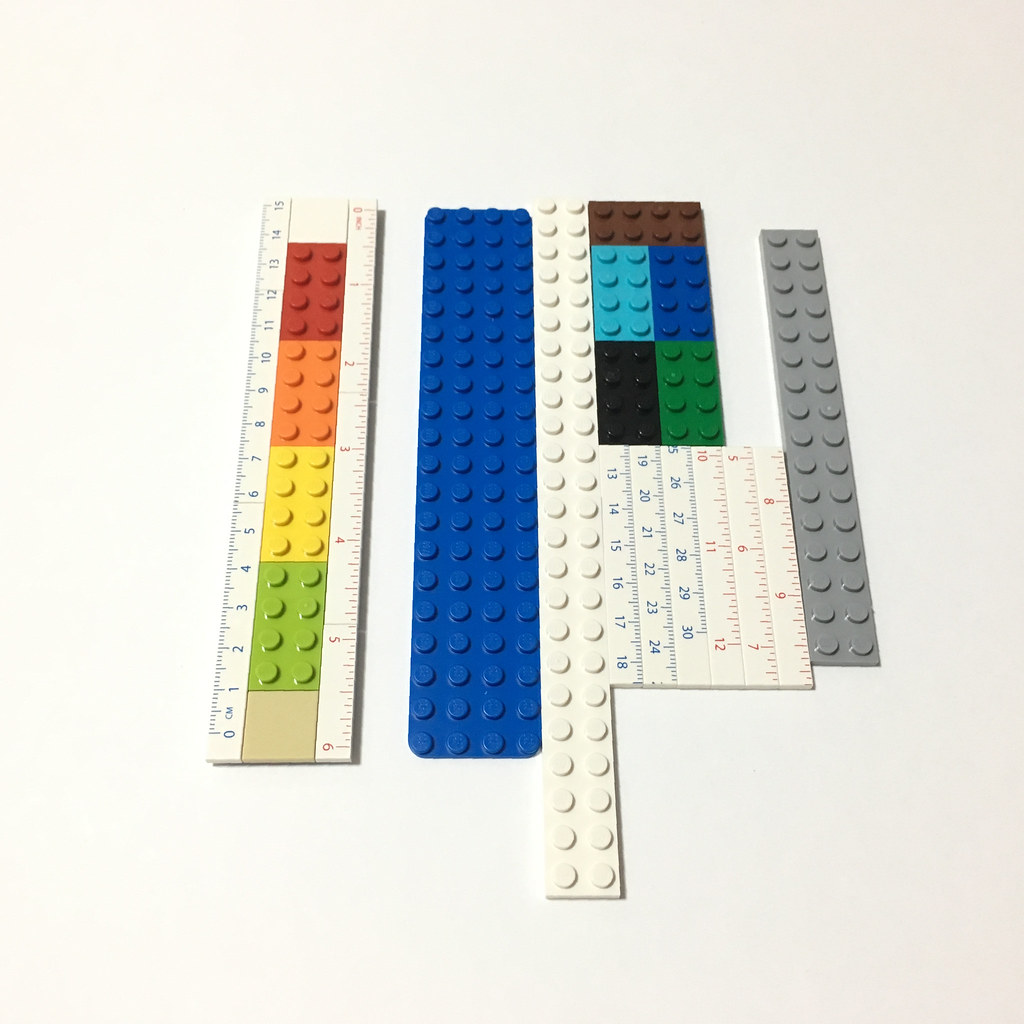 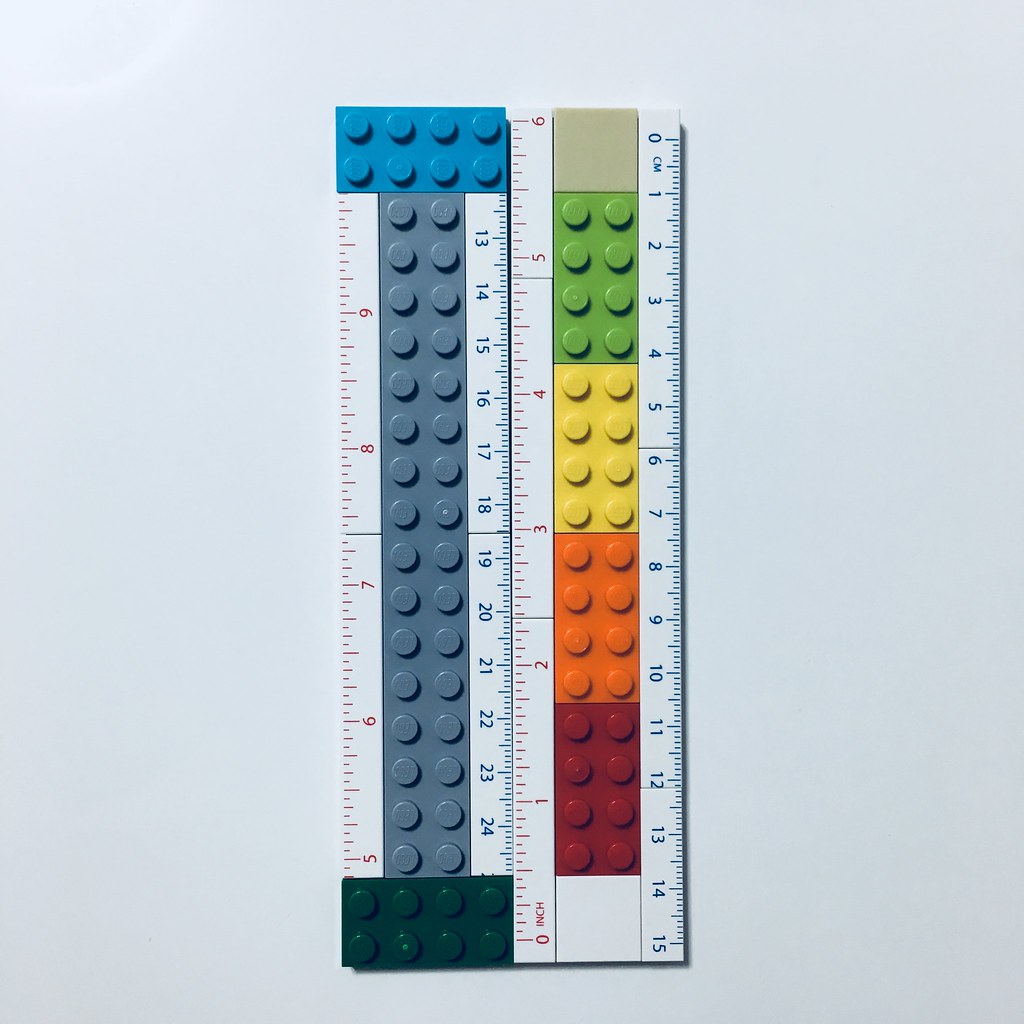 At a retail price of SGD19.90 and USD15.99, it’s a pretty steep price to pay for a ruler. At time of writing, I see numerous listings of it being sold at USD9.90 to USD11.90 on eBay so do look around if you intend to purchase one.

Did I regret getting it? No. It was nearly 100% what I expected it to be and the AFOL in me am happy to be getting some nice unique printed pieces.

A focus on the elements introduced in the stationaries line introduced in 2016 including the buildable ruler are also explored by New Elementary previously.