Last week, LEGO announced the upcoming sale of set 75954 LEGO Harry Potter Hogwarts Great Hall starting August 1 2018. It has been at least 7 years since the last LEGO Harry Potter sets were released and this year coincides with the 20th anniversary of Harry Potter so what a perfect year for them to re-release sets to fit the modern era.

Welcome to magical adventures at the Great Hall at Hogwarts!

-Features the buildable Great Hall and a tower.

-The 4-level tower features movable Grand Staircase spiral steps at its base, potions room, treasure room with chest and a turret featuring the Mirror of Erised with changeable pictures and roosting spot for Fawkes.

-Place the pupils in the boat and sail to Hogwarts Castle.

-Feast in the Great Hall, then use the sorting hat to select the pupils’ houses!

-Welcome the new students with Hagrid, Dumbledore and Professor McGonagall 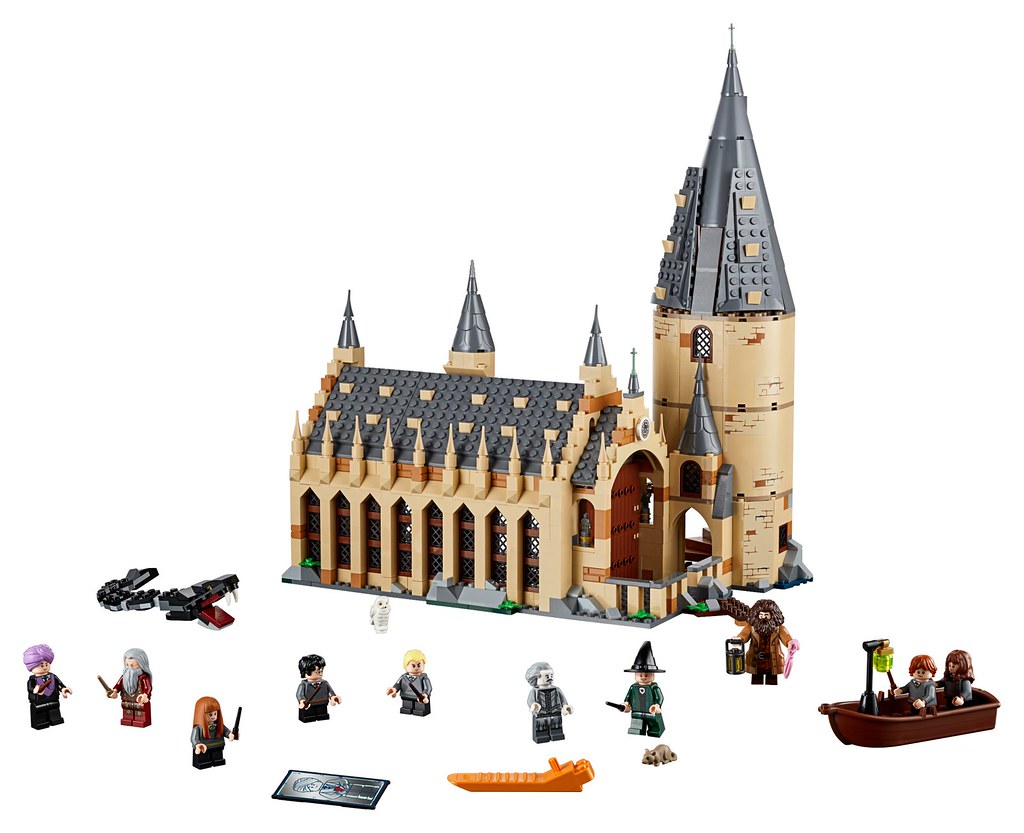 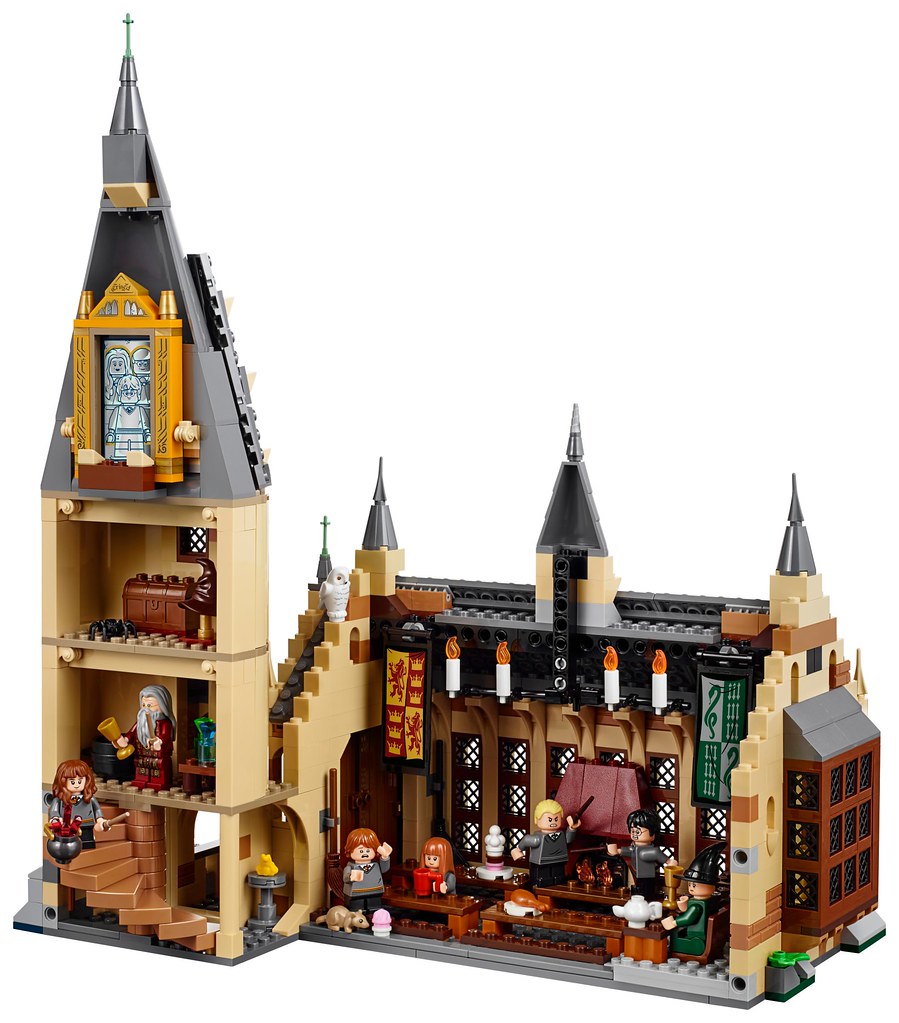 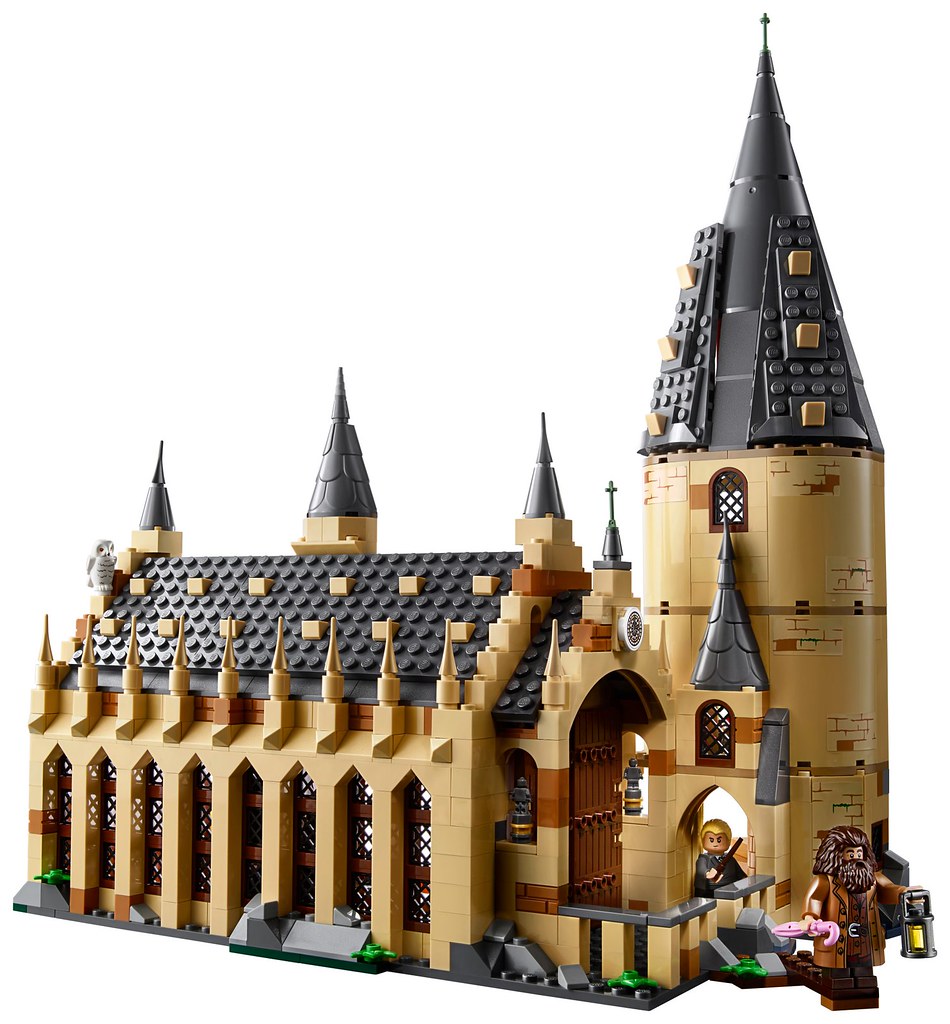 From the looks of things, there seem to be a few new moulds and definitely new prints galore for all the minifigs. Susan Bones makes her first appearance in LEGO form.

This particular set was also revealed physically at the New York Toy Fair but it seems that the display was a mockup/prototype set that was eventually whittled down to meet a predetermined price point ($100 instead of a $120 one) for the retail shelves.

For those interested, Nabii (Mark Strafford) the set designer seems to have taken some time to address some questions over at Eurobricks on why there were differences between the set shown at the New York Toy Fair and the official images released by LEGO as well as other EB forumers questions.

“Hi. Hogwarts Great Hall is one of the sets I’ve designed.

Sorry about the model that was shown at NYTF – it was an earlier version from the time before the price point of $100 was arrived at and there was some chance it was going to be $120 so it’s slightly bigger and has a layer of bricks and structure at the bottom which I had to take out. It surprised me to see it in pictures and videos of the event as it’s a version I built myself and was on my desk less than eight months ago. Though it’s nice to let people see a step from the design process like this, and be able to talk about it, it really shouldn’t be at TF!

PS – most of the new elements have been spotted, but did anyone notice the new 4x2x3 half cone element used in the construction of the tower roof yet?”

Q: Is there any chance that Professor McGonagall will have both regular legs and the new dress piece?”
A: No, sorry, she has legs so she can sit at the table. Kids found it frustrating that the only ones who could sit down were Doubledoor (heh), Nearly Headless Nick and Quirrel

Q: Does this mean that the 1×3 half arches are not in the final model?
A: Sorry, they are not in this model and should never have been shown at this point – we may make them in the future.

Q: Can any of your colleagues explain why professor Quirrell Is made in black and not brown like he is in the film?
A: Quirrel’s colours were approved and suggested by Warner Brothers under the direction of JK Rowling – if you think it’s wrong I suggest you take it up with her. 🙂

Q: Why do you use a lot of stickers on it?
A: There are a few. Most of them are on the Mirror of Erised, the house banners and the plain expanses of walls. Without them the model looked unfinished. The banners particularly added a lot. We could never have printed this many parts. Every printed part is the same as a colour change as far as production complexity goes and Harry Potter went over it’s allotted number of changes and actually had to take some from Jurassic World!

Q: Did you choose all the characters or TLC forced you to put all of them?
A: Well, I am TLC when it comes to this model so I wasn’t forced. There was a point where I wanted to take Susan Bones and/or Scabbers out to maybe keep in some other stuff, but at the end of the day I like Hufflepuff and rats too much. 🙂

Q: Can you tell us more about the wave of Harry potter and his future please?
A: No. Sorry, I can never talk about anything that hasn’t been officially released yet and right now all the other stuff is still secret.

Q: So where is Snape?
A: Snape was never ever in this set. Not sure why anyone thought he was. As I said I’m not allowed to talk about the other sets… but it would be very weird if he wasn’t here somewhere wouldn’t it?

Q:Are you a harry potter fan? And did you work on an other project from the wave of HP?

A:Yes, though I am also a Star Wars, Marvel, DC, LotRs, Destiny, Narnia, Overwatch, Portal, Anime, Dungeons and Dragons and Sci-fi fan to higher or similar extents, so it’s very rare I’m not excited by what I’m working on! I built a lot of sketch models of all kinds of parts of Hogwarts when we started this theme, I got a bit obsessed with it, but this is the only set I got to be final designer of. I hope we do more in future and I get to do more!

Q:Dumbledore was clearly some pre-version of the Michael Gambon actor. Was this changed in process because you wanted a parts 1&2 setting? or was the one from the toy fair really just a placeholder?

A:The toy fair figures are all half finished stand ins, only look at the press release figures. We based these sets on movies 1 and 2 with a few bits from 3 added for flavour, it is Dumbledore, which actor we don’t like to say.

Q:How did you choose to make “child variants” of the kids? Was it to save space or to reach another audience (because they look soooo adorable!)?

A:This was a huge discussion in the design team- some of us wanted full sized legs, others wanted kids legs as in the first couple of movies they were definitely kids. And it was not to save space or anything, it actually introduced all kinds of challenges about how to let them ‘sit’ at tables and in seats and things. (I almost talked about other sets there… sneaky fans!)

Q:Would they not also have had an issue with the fact that the student protagonists are unable to “sit” down because of the short legs?

A:Yes. This was part of our big discussion. In the end I found a way to make the benches so when they are in the set they give the impression of sitting, it satisfied most of the kids.

A:Play. The only antagonist in the set is Quirrel. If the kid wants to play fight conflict but also want to keep Quirrel’s secret from harry there needed to be a ‘bad guy’ and the Basilisk provided this. I built a ton of Chima sets, this is not my proudest animal build! But it is great play for kids.

Q:I’m starting to hope that you will be working on the next true Castle theme.”

A:True castle theme eh? You could be waiting as long as the space theme fans!

Q:Aren’t you guys meant to be the last line of defense against things like this, it is lego’s product. Who stands up for the consumer?

A:The product is ours and I’ll fight for the best building and play experience I can every day, I’ll do my best to make this an excellent toy. But the characters and setting belong to the creators and franchise holders. If JKR says Quirrel should be in black school robes like the other teachers then Quirrel is in black.

Although on many occasions we do stand up for the consumer please don’t think this is our responsibility, we aim to please and make an excellent product, and I want my work to be loved and appreciated, but it is not our duty, it is only our honour that keeps us doing so. At the end of the day we are a company, our priority will always be to make money for our owners. As consumers we all have to stand up for ourselves, let LEGO know if something is not good enough, if we make mistakes tell us. Keep us on our toes. Keep all companies on their toes, remind them who really has the power – it’s us!

Q:You both will have one set or will each have own?

A:They should both buy three sets each, one to build one to keep mint in sealed box and one because I answered this question for them.

Q:Am I right to think about 2 sets combine in one proper size?

A:One set is the proper size. : ) There is no easy way to join two back to back if that’s what you mean. Sorry. The back wall is open so kids can play inside.

Q:Has anything been said about the black stand at the beginning of the video? Are those Lily and James? What is it for?

A:That is Lily and James! Drawn badly by my own fair hand. As someone has guessed this was an early version of the Mirror of Erised that folded flat and slid under the floor of the hall, I wanted it to be like the Room of Requirements and appear like magic if needed. As that layer of bricks disappeared it moved to the tower. That both versions are in this model is even weirder to me as this ties the model down to a very specific point of development as I was figuring out where the mirror would end up and also as I was deciding if I should use the mirror design from the first movie or later in the series as they were a bit different! Cool.