Hello again. It has been a while since the review of the all the minifigures from the Infinity War playsets. As we all know by now, Thanos has snapped his fingers with his fully powered Infinity Gauntlet in the movie and turned half of the life in the universe into dust. Are you not excited to know how the remaining Avengers will try to reverse this devastating event? Fear not. May 2019 is coming. Before that, let’s indulge in the full and complete collection of the builds from these six Avengers Infinity War sets.

It is pretty cool when you put them all together like this where the six sets consist of a building, a transport vehicle, a small wall/gate, enemy spaceship and weapon and a LEGO mech. 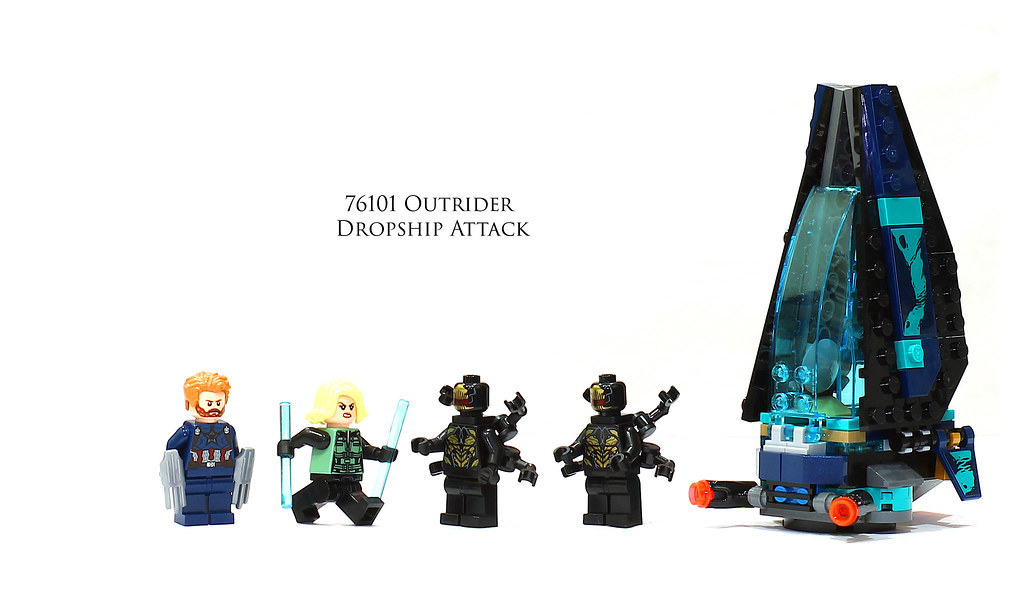 This set has 124 pieces and four minifigures. The dropship looks ugly in the movie but here in LEGO, the combination of teal, dark blue and black makes the ship looks great. 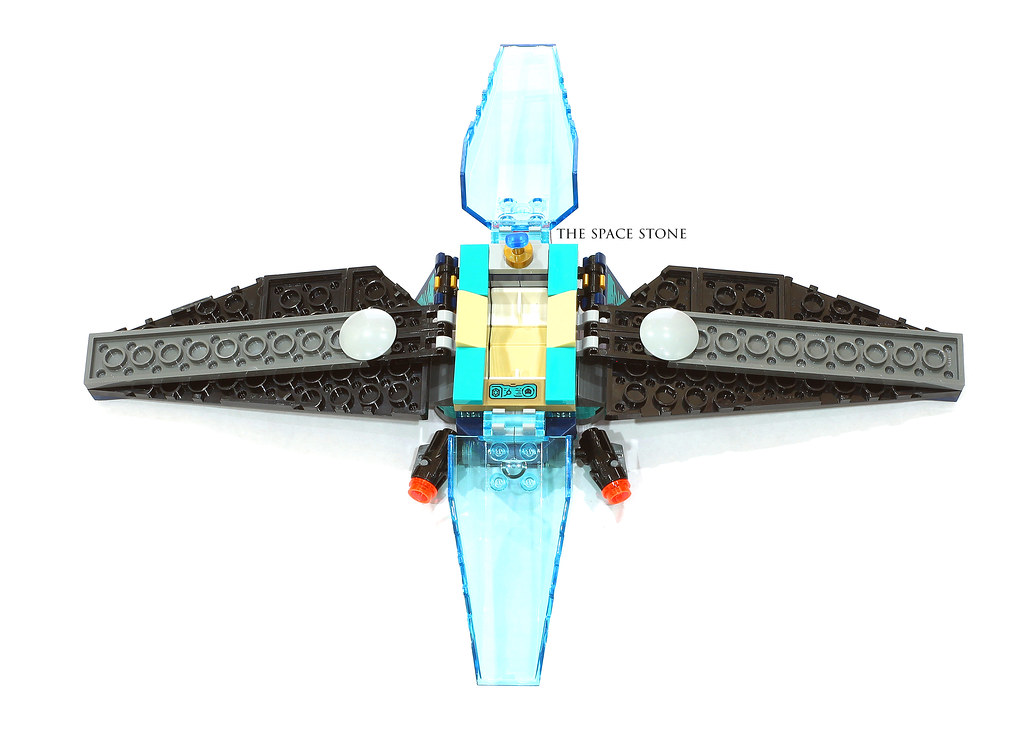 The ship can be opened up in four directions. The two outriders that were included in the set can comfortably sit in the seats at the center of the ship and here you can see the space stone is mounted at the back. Hmm… Brilliant move by Loki stashing his prize from Odin’s vault here.

Here we can see all four faces of the alien spaceship. I really love the trans blue windscreen at the front and back of the ship. They looked magical when you view the space stone through the trans blue parts. 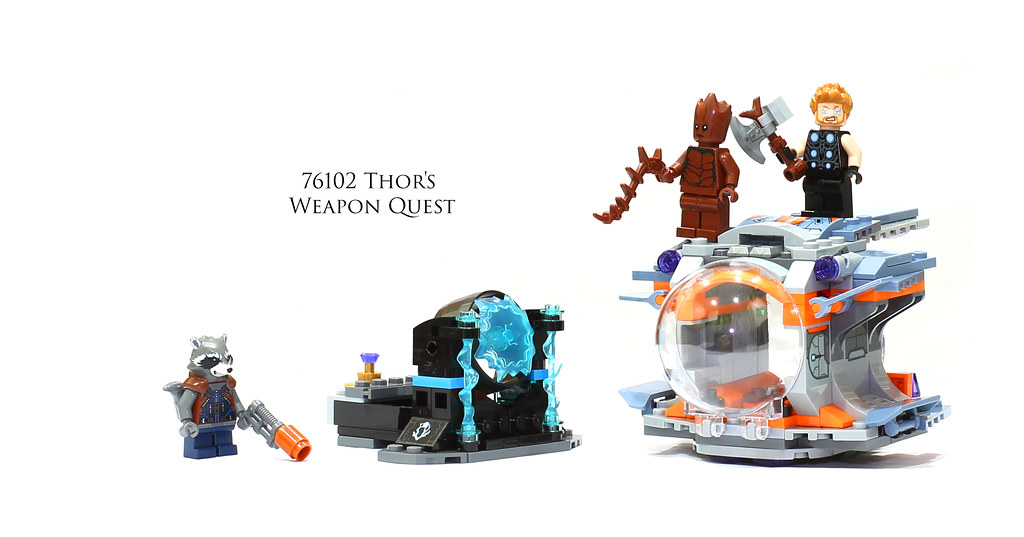 It has 223 pieces and three minifigures. Here you will get an Escape Pod which Rocket, Teenage Groot and Thor rode to the dying star to make that Thanos killing kind of weapon, together with the forge. 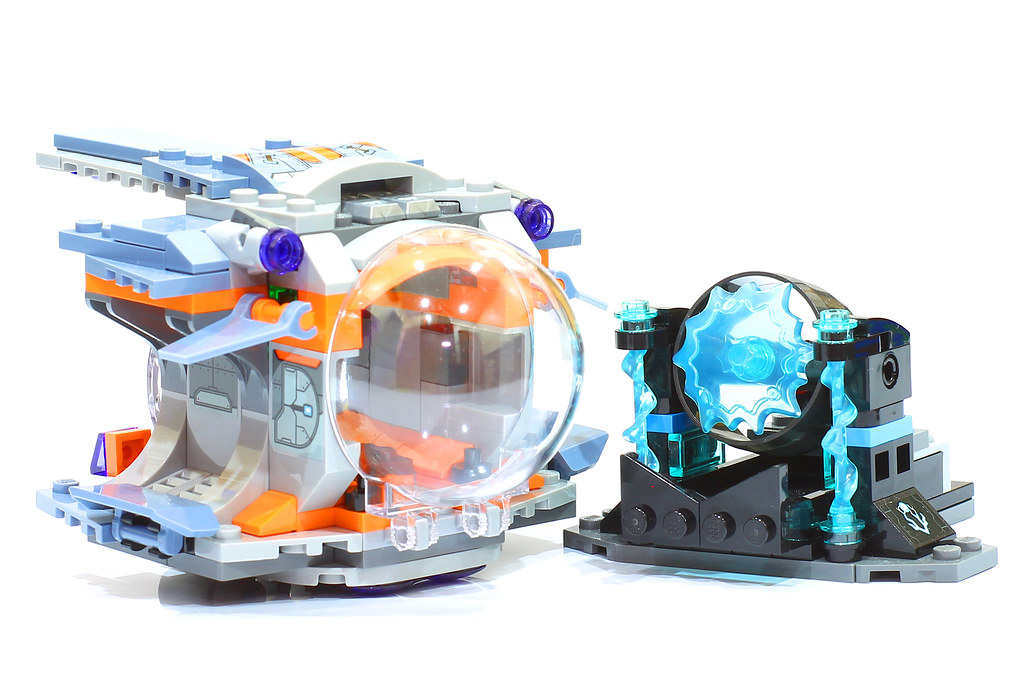 The combination of light blue and orange here in this escape pod is very soothing to the eyes. The stickers showing the metal clunk of the pod is a great addition to the side of the pod. The forge is very simple and tiny unlike the one in the movie but I think nothing else I can expect for this medium sized LEGO set. 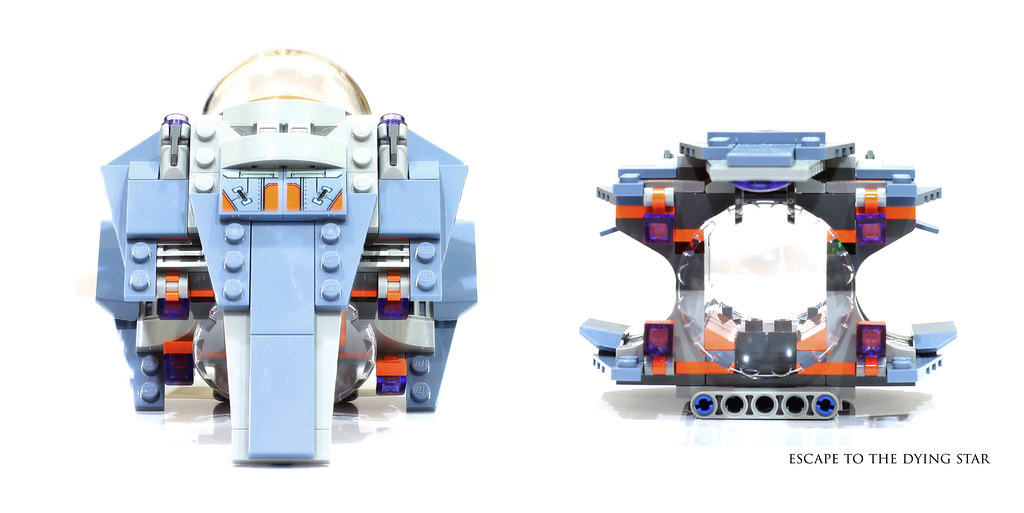 Top and back view of the pod. There are two stud shooters on the top of the pod and a two stickers on top to add on to the details of the pod. At the back view you can see the technic pin holes and axles to be connected to the Benatar. Oops, I think I left some parts when I remove it from the main ship. Let’s have a better look in the next picture. 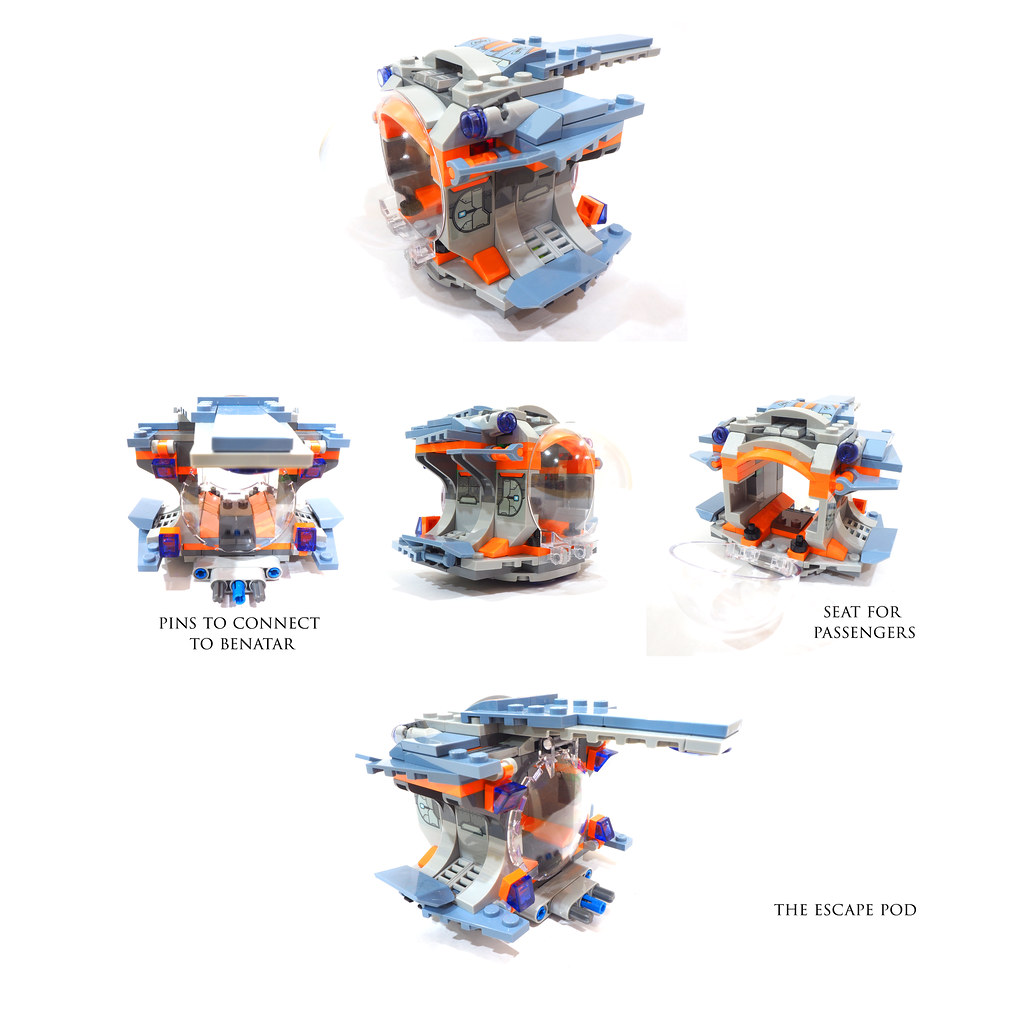 Multiple views of the pod. Here I’ve labeled the connection pins to the Benatar. On the inside of the ship, you can comfortably seat Groot, Rocket and Thor inside and close the front and back lids.

Let’s indulge in this small and cute home of the dwarves. This forge is superbly designed with a door placed horizontally to house the stormbreaker and you can slide that out after the Thanos killing weapon is forged. Here it housed the power stone that is supposed to be in Xandar. 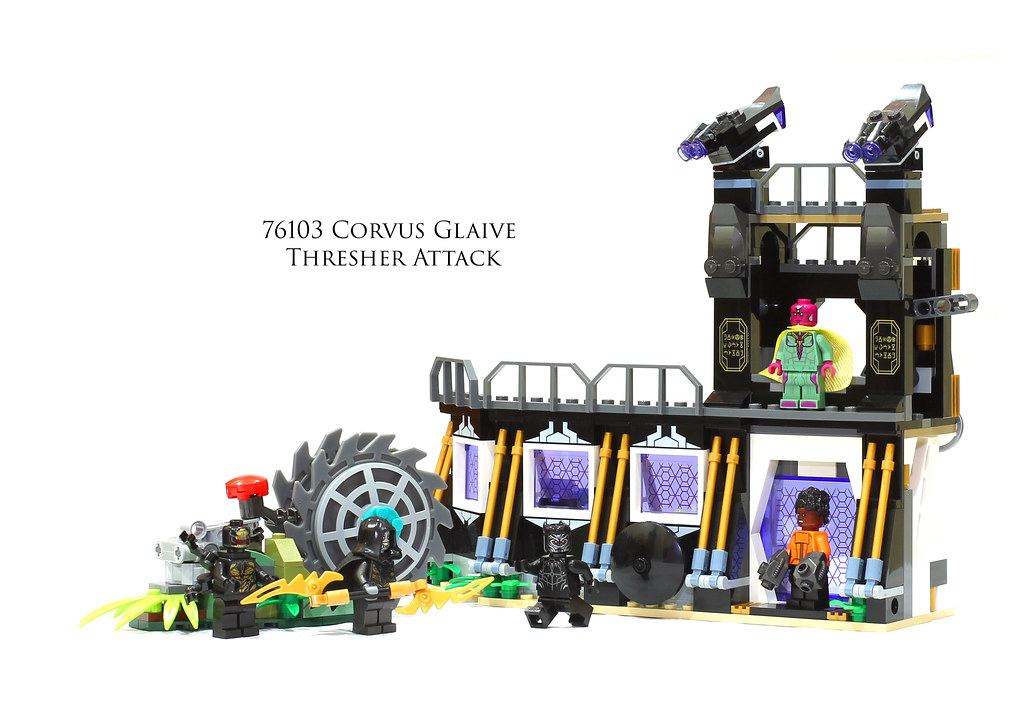 This set consists of 416 pieces and 5 minifigures. Here you build a wall in Wakanda and a wheel like weapon lead by Corvus himself to attack the hidden city. Trans purple is very prominent colour here in the combination of white frame, black pillars and gold bars.

Here is a look of the back of the wall. There is a bed for Vision to sleep on and Shuri is working on the separation of the gem and the android. Thresher launcher is a huge spiky wheel that can be shot out to attack the wall by pressing the red button. The door can be opened by pushing down the lever in the picture. 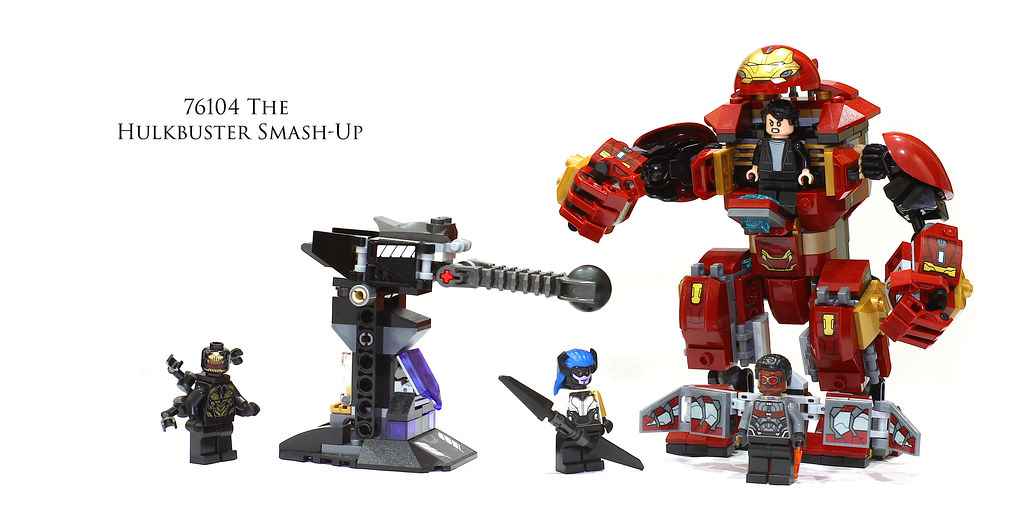 This set comes with 375 pieces and 4 minifigures. The chest part of the hulkbuster can be opened up and you can sit Bruce Banner inside to pilot it. Then we have a gun turret with a ball shooter housing a soul stone at the back of the build. 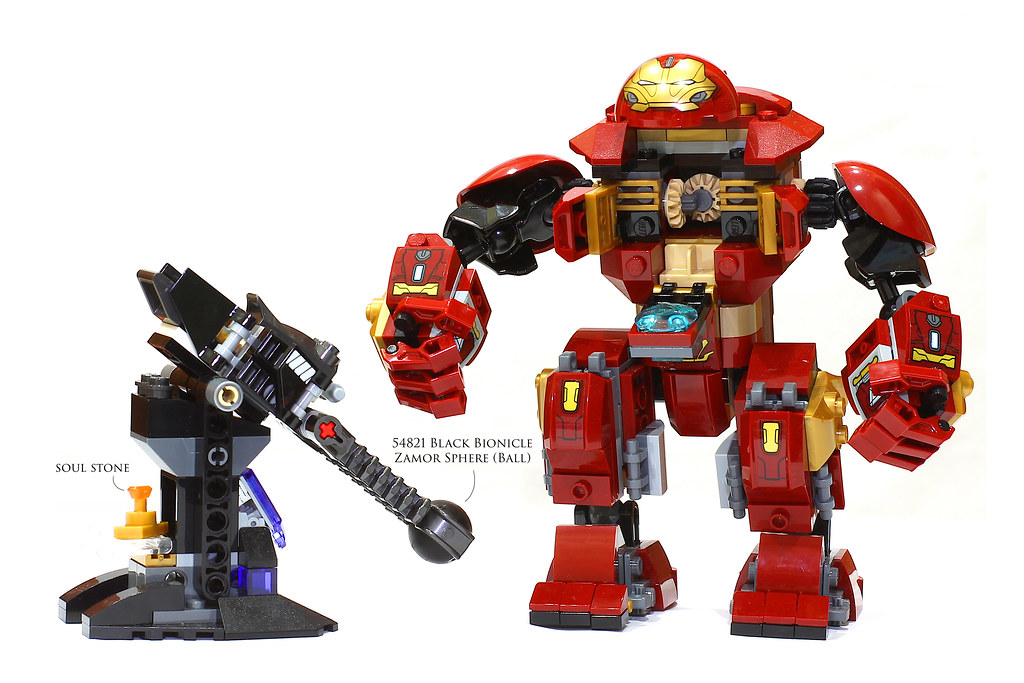 Here you can clearly see the inside of the Hulkbuster. I like the look of the gears inside to make it have a techy look. In the turret, you can see the soul stone and the black ball is quite a nice addition to parts as you get two black balls in the set. Here is my previous more detailed review of the set on Eurobricks if you wish to see more of this set.

This is a 674 pieces set with 3 minifigures and one Thanos big fig. The builds are mainly the Benatar and the Infinity Gauntlet plinth. Let’s not forget to mention the nanotech suit of Tony that makes Mark 50 looks bulky by adding a four sided wing rocket boosters build at the back of the minifigure. 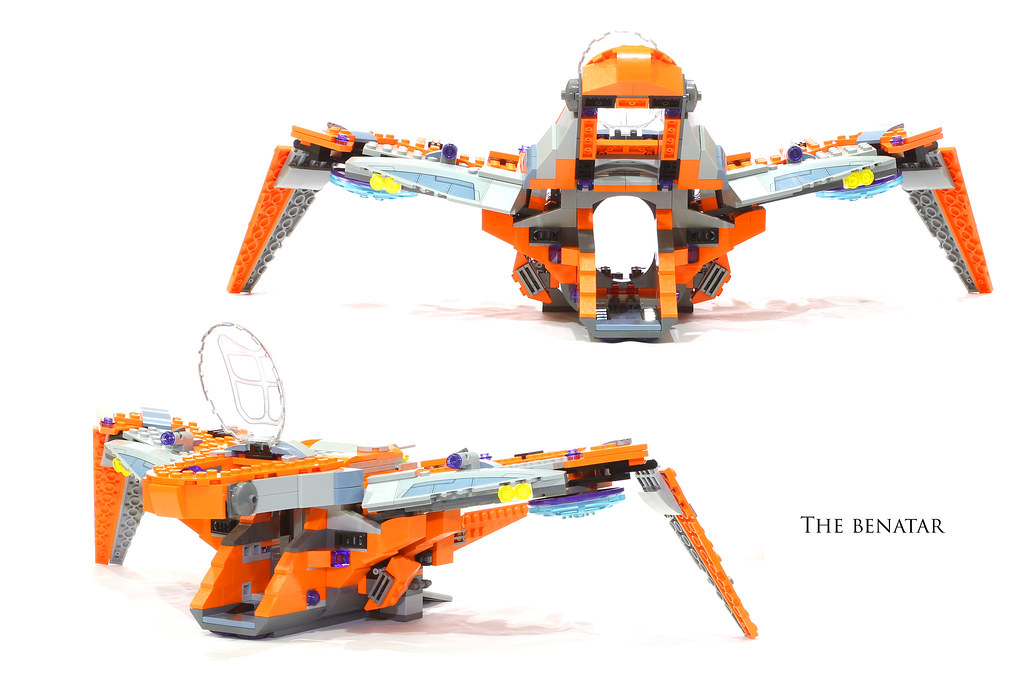 Here you can see that the Benatar is surprisingly quite big in size and after the cockpit is opened up there is a lot of space inside for a space scooter where Star Lord and Gamora can sit on. I like the trans blue wheel below both side of the wings.

Here is the comparison of the size of the main ship and the escape pod. 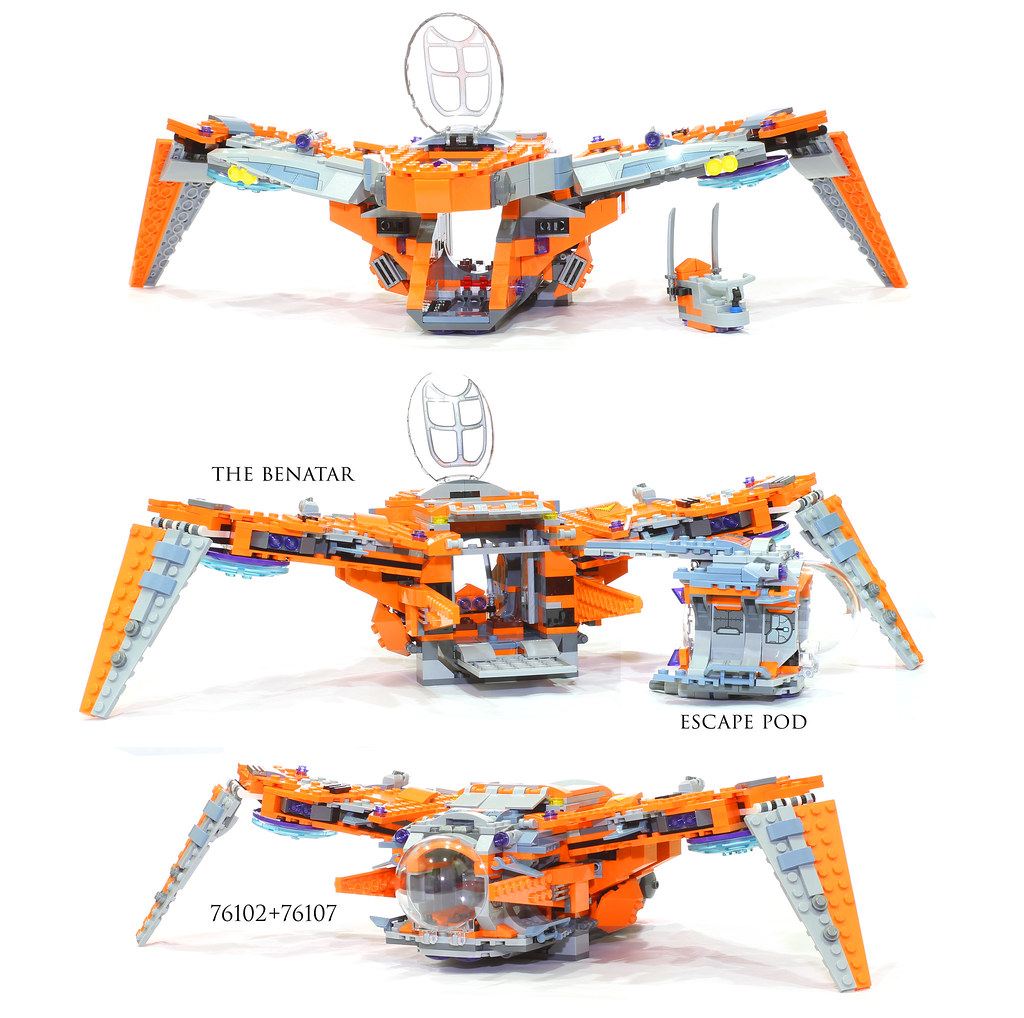 The first picture features the scooter that fits inside the Benatar. Second picture is actually the back of the ship and the lid needs to be lifted up to make way dor the Escape pod to connect to the ship. The third picture shows how seamlessly the two sets combined. The idea was brilliant. As compared to the previous Guardians spaceship The Milano which is named after Alyssa Milano the American actress which was the childhood crush of Peter Quill aka Starlord, The Benatar is named after Pat Benatar, the American singer/songwriter. 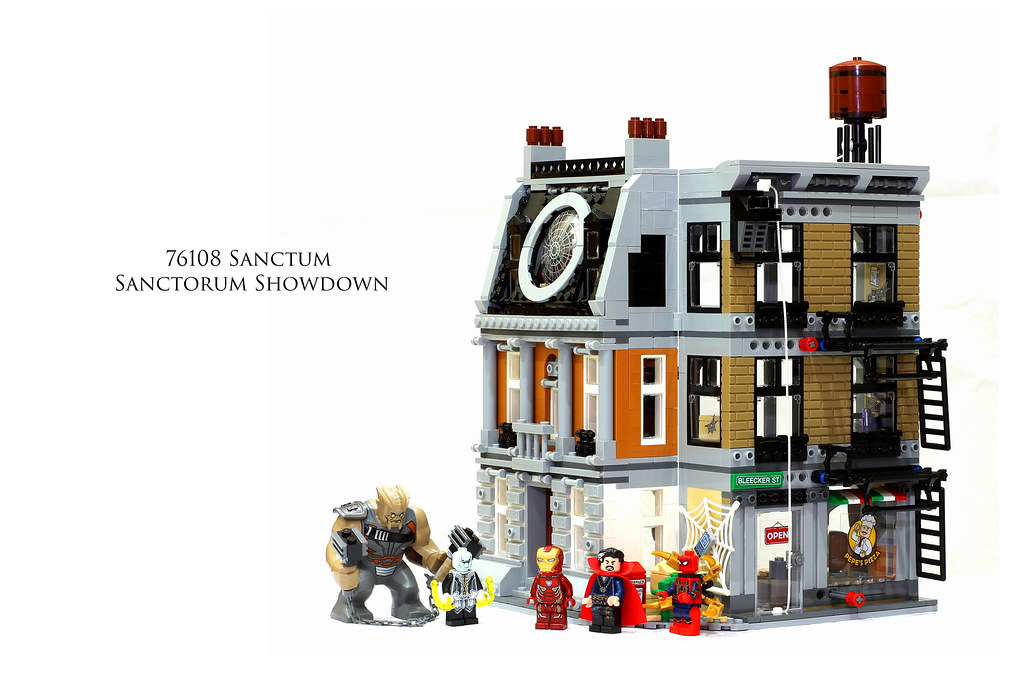 76108 Sanctum Sanctorum Showdown. This set consists of 1004 pieces, 4 minifigures and one big fig and is the largest set in the Infinity War lineup. 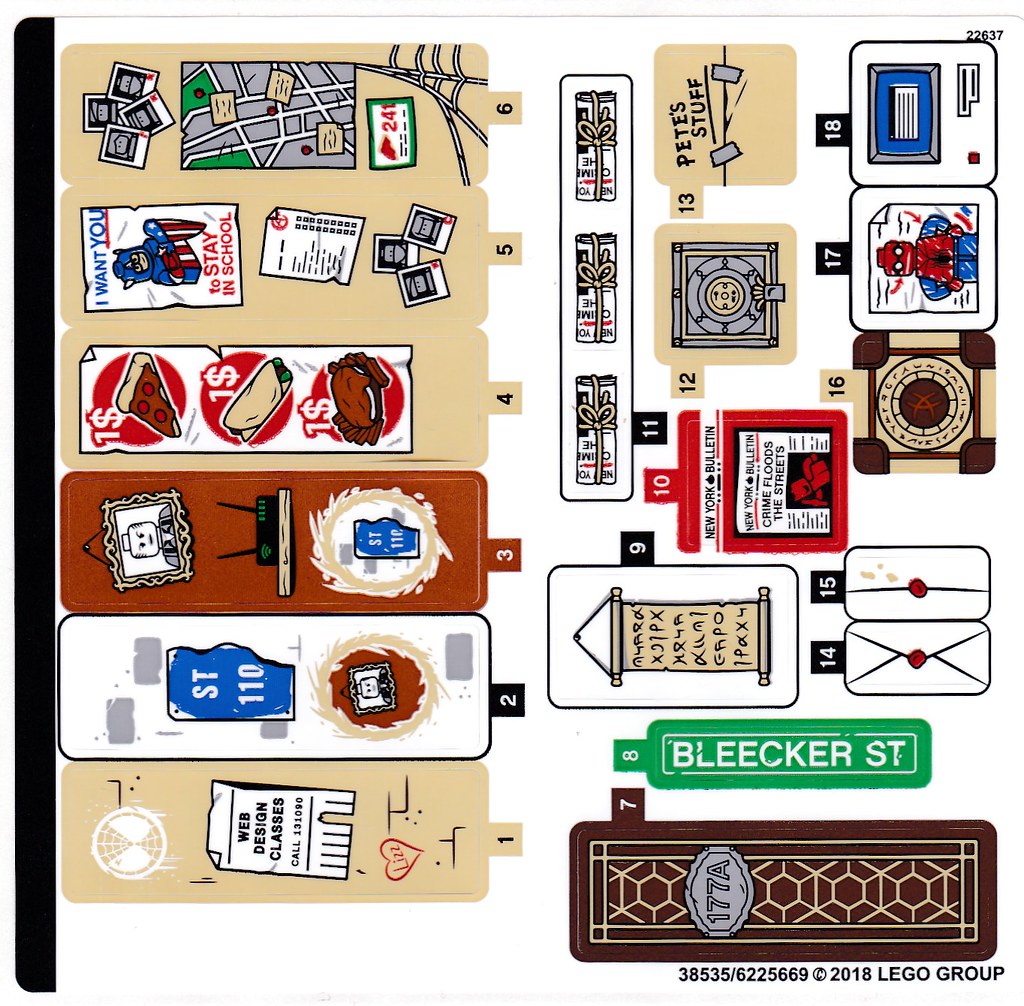 There are two sticker sheets in this set. Let’s not hate it first because inside the sticker actually contains some Easter eggs. For example sticker number 2 and 3 features the ancient one’s picture in black and white. The hilarious one is the wi-fi router in sticker number 3 showing that sanctum is not an old building without any technological devices installed. Sticker number 5 you can see captain america asking you to stay in school paid homage to the cameo in Spiderman Homecoming. In sticker number 1, you can see Pete’s love drawing of Liz Allan aka Vulture’s daughter. 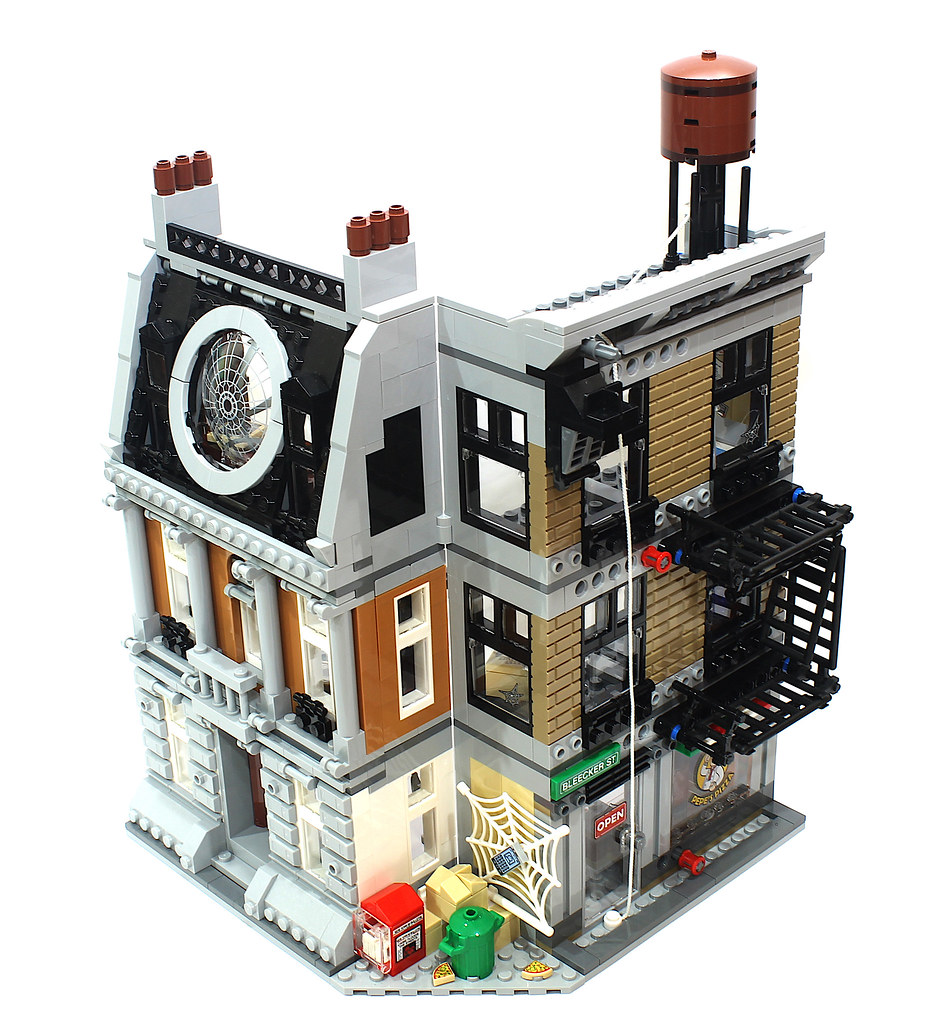 This is the corner view of the completed build of the building. The building is actually tall enough to match with modulars but the base is not wide enough, so you might need to expand it to put it side by side with your modular collection. The design of the building is impeccable, especially the use of the profile tan colored bricks at the back of the building. 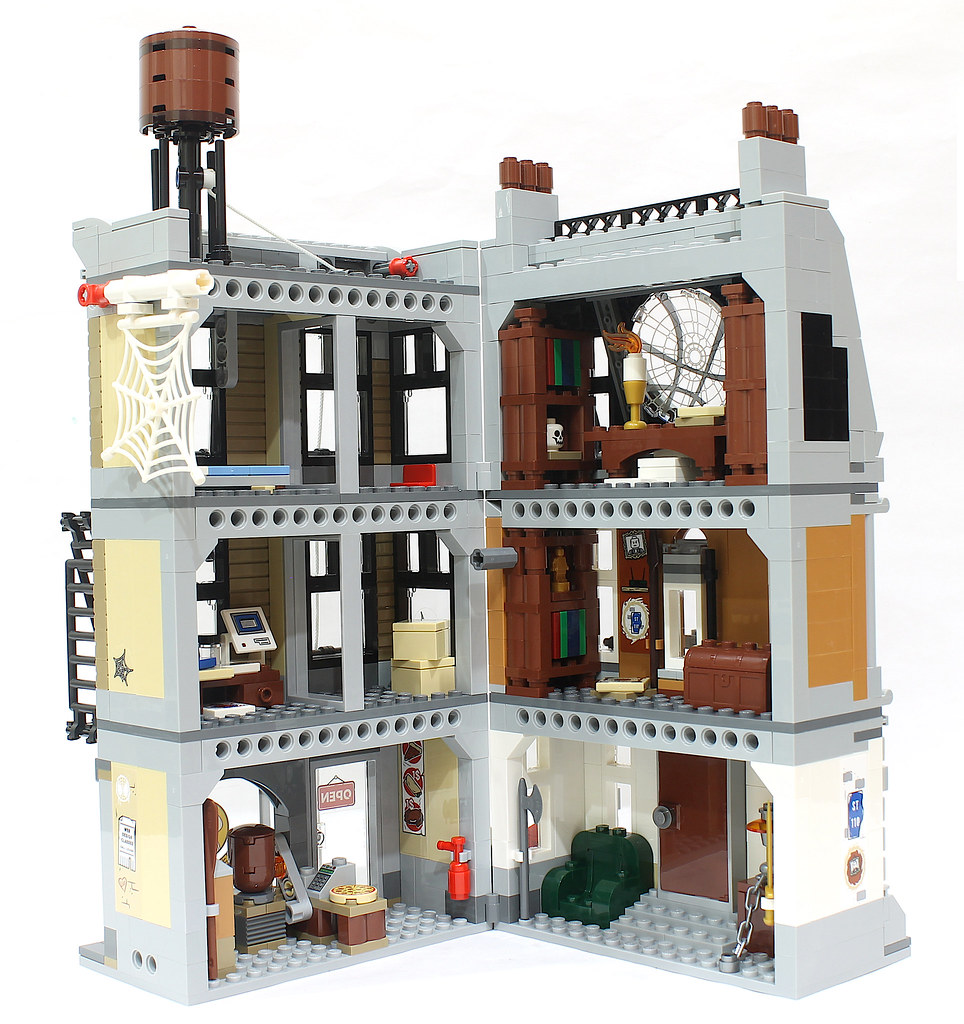 This is the interior of the building, which consists of six compartments. 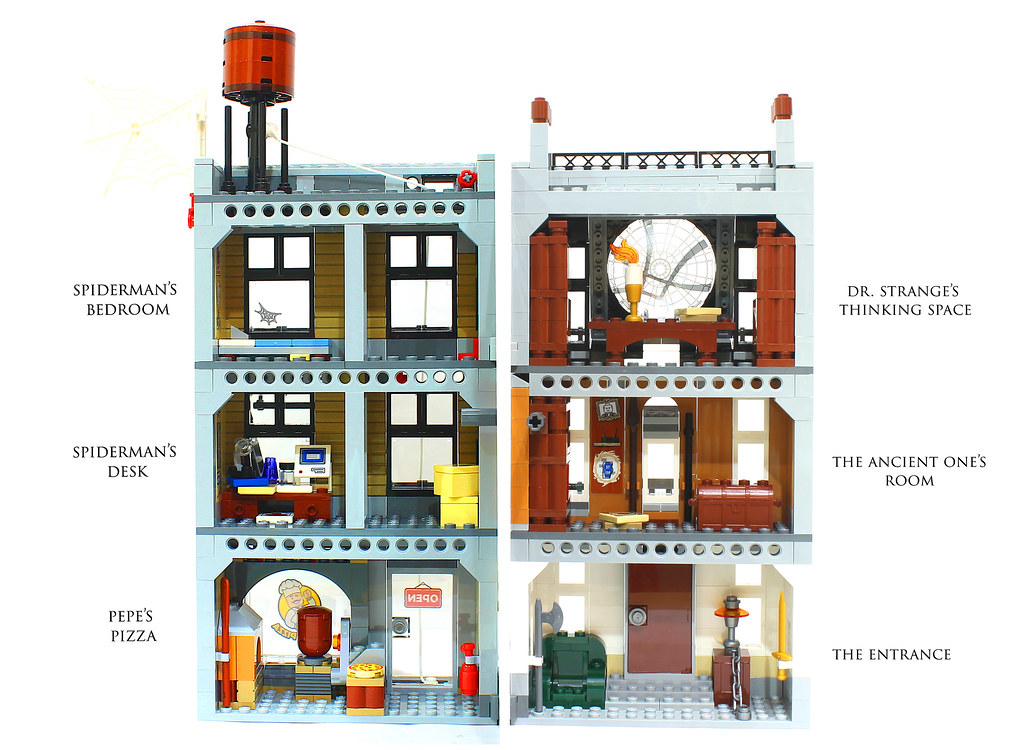 Zoom in to each room to check on the details. This set actually combined Peter Parker’s room and Dr Strange’s Sanctum Sanctorum. At the left side of the picture you can see a lot of Spiderman’s stuff. Pepe’s Pizza is quite awkward being here. Maybe the Ninja Turtles will come help fight Thanos one day? The entrance is decorated with a green sofa and some relics. The second floor is the Ancient One’s room with her pictures on the pillars. The third floor is my favorite part of this set. The printed sanctum logo is the best area as a background to have a good picture of Dr. Strange.

Thanks for reading my simple and compact review of the complete six infinity war LEGO set. I hope you enjoy reading it and I’ll meet you again next review!

This has been a full and complete set review by Mr. Beast on all of the builds in the LEGO Avengers Infinity War sets line-up.

Some of the sets used for this review were sent to us by The LEGO Group for the purpose of a review. Provision of sets do not in any way influence or guarantee a positive review.