Last week, we gave a review on the main build of set 31084 Pirates Roller Coaster. In this article we will finish up the review by reviewing the remaining two alternate builds suggested by LEGO in this Creator 3-in-1 set.
Alternate builds, in our opinion are secondary sets imagined by the set designers based off the elements used for the main set but sometimes they do come with some ingenious ideas for them.

This build consists of a main ride, a ticketing counter and a small cannon build complete with a palm tree 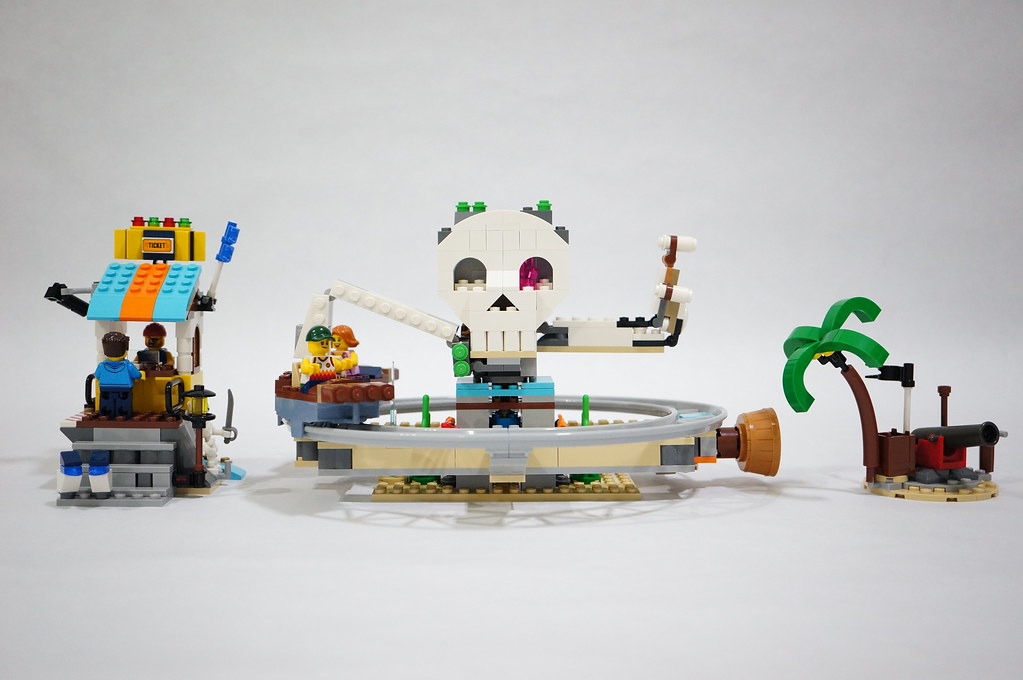 The ticketing counter is a pretty interesting build with some flourishes thrown in like the pair of bluebirds and a ticketing sign as well as water flowing below the counter which is set on top of a rock formation. A small cannon on a beach build finishes up the set with a small telescope and a palm tree.

The fairground ride, which I have termed the Circular Train Ride consists of a circular track, a skeleton monster with two arms and a train ride which seats two passengers. A crow’s nest bucket serves as the handle to operates a minor tilt mechanism.

The train is connected to the right arm of the skull “monster” and is operated by manually turning the other arm which makes the train go round the track. As mentioned, a small tilt to the entire ride can be engaged via twisting the “crow’s nest bucket” at the side of the ride.

Here’s a small gif that shows the ride in action.

This build was the one that excited us once the pictures of the set was revealed. The angle of the drop looked amazing and we wondered how it’d fare in “real life”

As usual, LEGO teases us with the complementary builds first. The first one is a concession stand slash/game counter? Once again, the cannon is accessorised, now with some wheels.
We are still unsure what the orange cones represent.

Another version of the ticketing counter is made for this ride. This time, it’s a simple one but includes a balloon dispenser and a small and cute barrier for the operator.

As seen in this shot below, the Viking Boat ride begins in terrifying manner for the minifigs. They are suspended in mid air and you can just imagine the horror on their faces at this particular moment. The carriage is another boat with the front passenger sitting on a carriage with the bowsprit, the middle passenger sitting with a mast and the rear passenger sitting and holding the helm/ship wheel. The peculiar angle of the tracks on top of the ride is held in place with support beams and clips at the right places.

Below is a gif of the Viking Boat ride in full action.

We highly recommend this Creator 3-in-1 set as it showcases the creativity of the designers in creating three different rides at a relatively good price point. The sets are quite wide as is necessary for the movement, so be prepared to cater some space for these fairground rides.