This will be a review of the mid-sized playset 10760 Incredibles 2 Underminer Bank Heist which features Mr. Incredible, Mrs. Incredible and Underminer

We again had the little one aged 6 build it and there was absolutely no complicated step at all. Being a Juniors set, the build was completed relatively quickly as it is intended for kids aged 4-7 (the  transition phase between Duplo and system sets) As always, there are NO stickers in the Juniors line and here are the printed parts featured in this set.

There are 5 printed parts included in this set, with probably 3 which are newly made for this set including the Hood of the Incredimobile, the vault print and the “Wanted” poster. 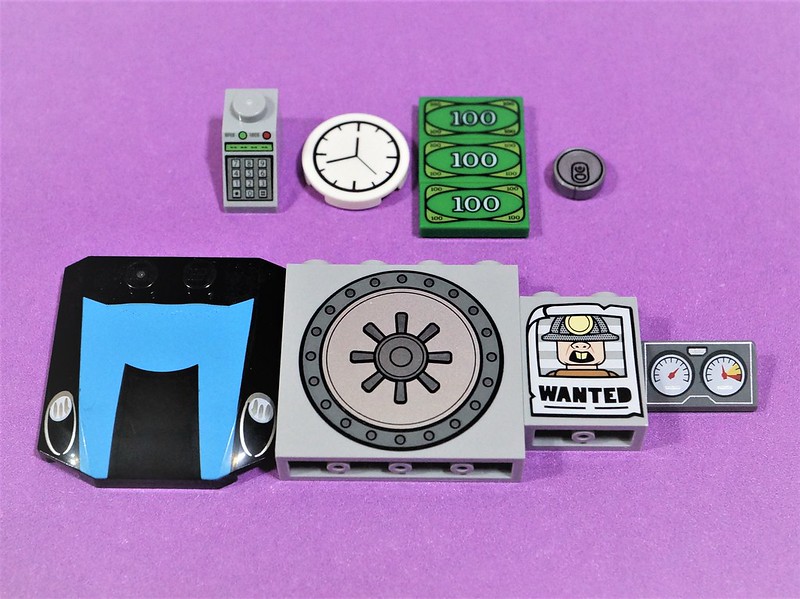 The full set includes the Tunneller vehicle used by the Underminer, the Incredimobile (a sports car with the old skool Mr. Incredible emblem on the hood) , a bank vault, a fire hyrdrant and wall and a lamp post.

In all, this mid-sized Juniors set is pretty good with decent play-ability for the young ones which includes 3 minifigures, 2 easy to build vehicles and 2 play areas for a decent bank heist simulation (The red trolley pictured on the boxart does exist. We just missd putting it into the composite shot below)

There are 3 minifigures included in this set including Underminer, Mr. Incredible and Mrs. Incredible. All 3 are wonderfully detailed although some AFOLs might be clamouring for Mr. Incredible as a bigfig or a body resembling Axl from the Nexo Knights series instead of the standard minifigure. Both Mr. and Mrs Incredible spot dual printed faces while the Underminer sports his workman clothes and tellingly a cape which we all know is a safety hazard according to Edna Mode’s analysis. (the cape has one hole to fit onto the neck as opposed to two holes for common System themes)

As this is not the first appearance of Mr. Incredible in minifigure form, we did a small pictorial comparison of the current one vs the one released in the Disney Collectible Minifigures Series 1. In particular two changes are seen.
1) There is a totally new torso which incorporates the belt instead of having the belt printed on the hips on the older version.
2) The head now has dual expressions including a smirk and a big smile